Diet and Exercise in a Pill: Experimental Anti-Obesity Drug Could "Trick" the Body 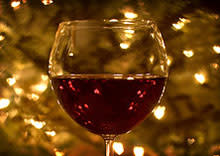 A drug that mimics the effects of a compound found in red wine has been shown to prevent obesity and diabetes in mice that were fed a high-calorie diet and prevented from exercising, taking another step towards the target of a anti-obesity pill. The natural compound found in grapes and red wine, called resveratrol, is believed to have numerous health benefits related to longevity, heart health, and metabolism.

But tests in mice suggested gallons of wine would be necessary for humans to stand a chance of getting the same benefits. The scientists turned their attention to creating a more potent drug [BBC News].

The new experimental drug, called SRT1720, was developed by the pharmaceutical company GlaxoSmithKline. Researchers explain that

mice fed a high-fat diet were tricked into switching their metabolisms to a fat-burning mode that normally takes over when energy levels are low.... "We are activating the same enzymes that are activated when people go to the gym," said Peter Elliott, a vice president at Sirtris Pharmaceuticals, the Glaxo unit that developed the drug. "That is why we believe the profile for this drug is very safe" [Reuters].

In the study, published in the journal Cell Metabolism [subscription required], researchers fed mice a high-fat, high-calorie diet for 10 weeks and prevented them from exercising regularly, while also giving some of the mice the SRT1720 drug. At the end of the 10 weeks, the mice on the experimental regimen were found to have more endurance in treadmill-running, and

the drug also protected the animals from the negative effects of high-calorie diets: metabolic disorders, obesity-related diseases, and insulin resistance. It even improved the mice's cholesterol.... It's as if the couch-potato mice underwent a strict diet and exercise regime [Technology Review].

The drug works by activating

one of several enzymes that regulate the function of mitochondria — cellular power generators that convert glucose into chemical energy. The wearing down of these generators has been linked to heart disease, Alzheimer's disease, diabetes, cancer and other age-related afflictions [Wired News].

The next step for the researchers is to test SRT1720 for safety in primates and humans; the drug could eventually be approved for treating diabetes, obesity, and other disorders. Related Content: 80beats: The Young at Heart Drink Red Wine DISCOVER: Is Wine What Flows Through the Fountain of Youth?