Dental Researchers to Mouth Bacteria: Don't Get too Attached 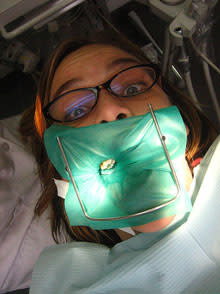 Oh, the glorious future: Eat as much sticky candy and drink as much soda as you want! Go to bed without brushing your teeth! Never have to hear that horrible whine of the dental drill again! Cavities could one day become a thing of the past, as new research is decoding how our mouth bacteria are able to attach their dirty little mounds of plaque to our teeth, and is suggesting ways we might be able to outsmart them. Cavities come from bacteria that live in our mouths and digest sugars in the food we eat, producing tooth-dissolving acids. The most annoying tooth-bug is Streptococcus mutans, which causes tooth decay. The bacteria use an enzyme called glucansucrase, which converts sugar into long sticky chains that allow the bacteria to glue themselves to the surface teeth. Once they're in place, they can start in on the acid production. Researchers at the University of Groningen in the Netherlands made a 3D map of the enzyme and found that it has a unique folding pattern, looping over on itself to form a U-shaped assembly line where the sticky sugar chains are produced. The enzyme splits sucrose into fructose and glucose, researchers found, then adds the glucose to the growing plaque strings. Knowing the structure can help researchers develop drugs to stop the enzyme from working (and thus stop the plaque from forming and the bacteria from sticking to your teeth). Previous attempts to make such a drug failed because they also interfered with the necessary saliva enzyme amylase, which breaks down starches, lead author Lubbert Dijkhuizen said in a press release:

"We already knew that the two enzymes were similar," says Dijkhuizen. "But the crystal structure revealed that the active sites are virtually identical. Future inhibitors thus need to be directed towards very specific targets because both enzymes are evolutionary closely related."

If the researchers can develop such a precise inhibitor, they could slip it into a variety of products. From the press release

Dijkhuizen points out that in future glucansucrase inhibitors may be added to toothpaste and mouthwash. "But it may even be possible to add them to sweets," he suggests. "An inhibitor might prevent that sugars released in the mouth cause damage."

That might mean that all those dentist-loving gas junkies

out there wouldn't get their nitrous oxide fix. I guess we would still have to brush to avoid garlic breath, though. Related Content: Discoblog: The End of Fillings? New “Liquid Enamel” Could Rescue Teeth