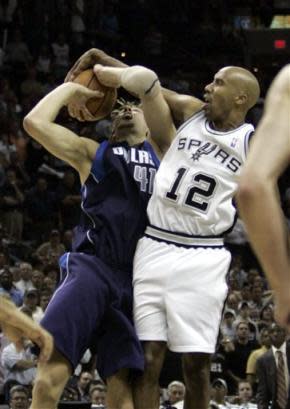 Matthew Yglesias and Tyler Cowen both consider the eternal question of whether defense or offense is more important, especially in the context of new NBA rules that allow for more scoring. Apparently some folks are arguing that, since it's now easier to score, a team's priority should be to bring in offensive-minded players, rather than concentrating on defense. (I'll leave it as an exercise to the reader to identify the logical flaw there.) Yglesias argues that offense and defense must both be important, since the goal is to end the game with more points than the other team:

I concede that the new rules have made it harder to play defense. I fail to see, though, how that makes defense less important. Two factors determine who wins a basketball game: how many points your team scores and how many points the other team scores. Since you have the ball roughly half the time and the other team has the ball roughly half the time, it stands to reason that offense and defense should have exactly the same importance.

Unfortunately, that last bit is just as logically flawed as the previous argument. The truth is that defense is (still) significantly more important than offense in winning games. How can that be, if teams (basically) spend the same amount of time, or number of possessions, on offense and defense? To decide which skill is more important, we have to consider the variation in results obtained by being good at one vs. being good at the other. In other words, which has a bigger effect on wins: being one of the best offensive teams, or being one of the best defensive teams? Yglesias looks at some individual playoff results, which are somewhat inconclusive. But we can just look at the season stats and compare the results of being good at offense vs. being good at defense. Of course, we're faced with deciding how to measure those skills. Points scored is actually not a good measure, since that is affected more by the pace of the game than by true offensive or defensive prowess. Points per possession would be perfect, but I don't know where to find that stat. So instead let's just look at Team Offensive/Defensive Field Goal Percentage (FG%), which is a pretty good proxy for offensive/defensive aptitude. What you should really do is to type in all the data and correlate with wins, but that sounds like work. Instead, let's just define a "good offensive/defensive team" as one in the top 10 of the 30 teams in the NBA in offensive or defensive FG%, respectively, and "bad" as being in the bottom 10. We immediately see that there is a greater range in defensive aptitude than in offensive aptitude. The median good offensive team shoots at a .474 clip, whereas the median bad offensive team shoots .439, for a difference of .035. But while the median good defensive team holds their opponents to .439, the median bad defensive team only holds their opponents to .478, for a difference of .039. In other words, there is a slightly bigger difference between good and bad defensive teams than good and bad offensive teams. Concentrating on defense, it should follow, would potentially have a bigger outcome in the win/loss columns. And it does. The winning percentage of the good offensive teams is .580, while that of the bad offensive teams is .413, for a difference of .167. But the winning percentage of the good defensive teams is .615, while that of the bad defensive teams is .358, for a difference of .257. That's a substantial difference. A good defensive team is much more likely to be a winner than a good offensive team. The simple ex post facto explanation is just that all NBA players are pretty good scorers, or at least that the players who do the bulk of the scoring are all pretty good. There's not too much of a difference in overall efficiency between the very-good and the truly excellent. But defensive abilities are much more variable, and perhaps also more dependent on coaching and team dynamics. Putting your effort into defense has a larger marginal payoff than putting it into offense. Which most coaches would agree with. People these days like to blame Pat Riley for that, but I think Bill Russell figured it out long ago.