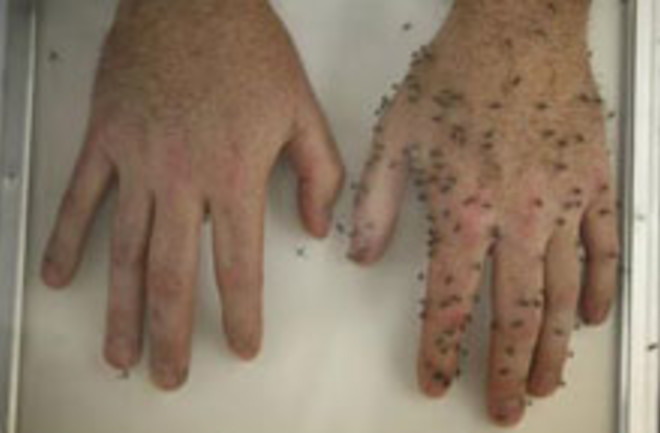 Finally, the U.S. Department of Defense is working on a bomb that even peaceniks can get behind -- a bug bomb! Motivated by the need to protect soldiers in the field from biting pests, the Defense Department teamed up with the Department of Agriculture to search for a longer-lasting and more effective insect repellent.

“That was the principal motivation, the usability for the military,” says USDA investigator Ulrich Bernier. “You don’t want your soldiers reapplying every 15 to 20 minutes” [Science News].

Researchers have already identified several chemical compounds that seem far more effective than the current standard-bearer, DEET. In one test, a cloth soaked with a particularly promising compound repelled mosquitoes for 73 days, while DEET-soaked cloth lasted only 13 days. In the real world (and outside of a laboratory test), no bug spray would last this long. Because the novel chemicals haven't yet been tested for human safety, researchers couldn't apply it directly to the skin of volunteers. Instead, the test subjects

wore the chemicals on cloth patches stuck to a glove, which they inserted into a box containing about 500 insects for one minute [Boston Globe].

Researchers have long been interested in several chemicals found in black pepper that have insect-repellent properties. But they had help in the task of zeroing in on the most effective molecular structures. To identify novel structures with potential repellent activity, the team used an artificial neural network, a computer program that can be 'trained' to recognise patterns in large, complex sets of data. "From the database we selected 200 [compounds] of know repellent efficacy," says team member Ulrich Bernier. "We showed 150 of these to the neural network, asking it to take note of numerous aspects of the molecules - structure, position of atoms, number and type of bonds, electronic and electrostatic properties and so on."

Having trained the system to recognise a "good" repellent, the researchers tested its new-found knowledge by showing it the remaining 50 compounds. It successfully predicted the efficacy of these. "We then presented the neural network with 2000 molecular structures, and it selected 34 as being good repellents," says Bernier [Chemistry World].

The USDA has selected seven of the compounds for further study, according to the report in today's Proceedings of the National Academy of Sciences [subscription required]. The USDA will begin testing them for human safety this year, and will investigate whether they

irritate skin, evaporate, dissolve in sweat or fail in ways that other repellents do" [The New York Times].