"Death Map" Plots Where Nature Is Most Likely to Kill You 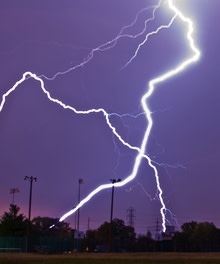 If you're not feeling lucky, don't venture into Wyoming, Utah, or Colorado. These states have some of the highest mortality rates caused by natural disasters, according to a new "death map" that plots where Mother Nature takes her heaviest tolls. From 1970 to 2004, natural disasters killed some 20,000 people in the U.S. Surprisingly, the deadliest events aren't the ones that make the headlines. More people died from heat/drought (19.6 percent), sizzling summers (18.8 percent), and freezing winters (18.1 percent) than earthquakes, wildfire, and hurricanes combined (less than 5 percent). And who would've thought that lightning accounted for 11.3 percent of deaths from natural hazards? The strikes were especially concentrated in the New England and southeastern states. While severe winter weather is particularly deadly in the Rocky Mountain region, the southern states are generally more dangerous, often hit by flooding along the coastlines and tornadoes in inland areas. The safest regions include the midwest and urban areas in the northeast and in California. Though, of course, city life presents other dangers... like jaywalking. Related Content: DISCOVER: Science Proves that City Life Really is More Electrifying DISCOVER: Sliced: Inside a Tornado