David Goldstein on the HapMap, selection and race 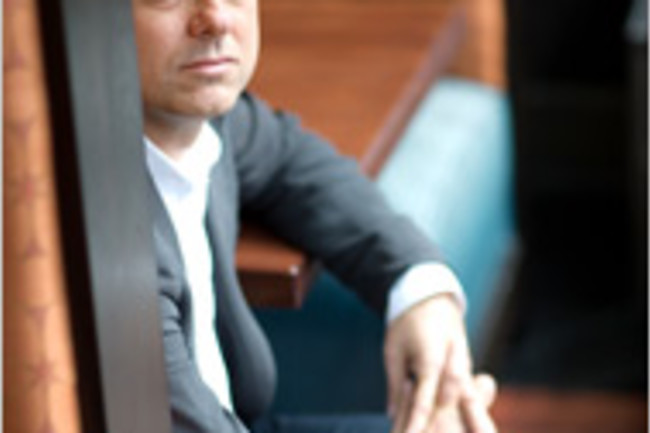 A few months ago I reviewed David Goldstein's Jacob's Legacy, a geneticists look at the history of the Jewish people. Today The New York Times has a piece, A Dissenting Voice as the Genome Is Sifted to Fight Disease, which profiles Goldstein and uses his own positions and opinions as a jumping off point into many diverse topics. First, he suggests that the common disease-common variant hypothesis has been falsified. Or, more pragmatically it has not returned great results which may be applied by medical researchers in the quest for treatments and diagnoses of susceptibilities. Goldstein says:

"After doing comprehensive studies for common diseases, we can explain only a few percent of the genetic component of most of these traits," he said. "For schizophrenia and bipolar disorder, we get almost nothing; for Type 2 diabetes, 20 variants, but they explain only 2 to 3 percent of familial clustering, and so on." The reason for this disappointing outcome, in his view, is that natural selection has been far more efficient than many researchers expected at screening out disease-causing variants. The common disease/common variant idea is largely wrong. What has happened is that a multitude of rare variants lie at the root of most common diseases, being rigorously pruned away as soon as any starts to become widespread.

I don't know if the opinion outlined here is all that controversial. If we're trying to figure out genomic regions which might be implicated in something like schizophrenia, a QTL on the order of 1% isn't that useful. Or, as low hanging fruit goes it really isn't hanging that low. A logical a priori reason is the one which Goldstein proposes; if there is a common variant which causes a disease we would expect natural selection to purify and expunge that allele over time. In isolated populations genetic drift and inbreeding can increase the frequency of rare deleterious variants as the balance between selection and stochastic factors shifts, but isolated breeding populations generally can not contribute to common variants. Drift is stochastic after all, so we assume that inbred groups would exhibit high frequencies of different deleterious alleles at different loci. The article closes with a punch:

Another pursuit that interests him, one of high promise for reconstructing human evolutionary history, is that of discovering which genes bear the mark of recent natural selection. When a new version of a gene becomes more common, it leaves a pattern of changes that geneticists can detect with various statistical tests. Many of these selected genes reflect new diets or defenses against disease or adaptations to new climates. But they tend to differ from one race to another because each human population, after the dispersal from Africa some 50,000 years ago, has had to adapt to different circumstances. This newish finding has raised fears that other, more significant differences might emerge among races, spurring a resurrection of racist doctrines. "There is a part of the scientific community which is trying to make this work off limits, and that I think is hugely counterproductive," Dr. Goldstein said. He says he thinks that no significant genetic differences will be found between races because of his belief in the efficiency of natural selection. Just as selection turns out to have pruned away most disease-causing variants, it has also maximized human cognitive capacities because these are so critical to survival. "My best guess is that human intelligence was always a helpful thing in most places and times and we have all been under strong selection to be as bright as we can be," he said.

Actually, I don't know what's going on here; David has to know that there are plenty of genetic differences driven by recent human evolution. Lactase persistence is the most prominent one, but the copy number variation on amylase is probably a less powerful instance which points to more common between group differences driven by dietary shifts. I think the main point here is to mitigate the possibility of between group differences in cognitive phenotype. That being said, I don't think that human intelligence was always helpful, nor do I think it has been under strong unidirectional persistent selection recently. We know that in the modern period fitness is negatively correlated within intelligence in many societies. This wasn't always so, and isn't always so, but the point is that there isn't a universal correlation between higher intelligence and higher fitness. We know this for a fact, because variation in intelligence remains! You see, if strong directional selection is operating upon a trait you assume it to exhaust the underlying variation and fix the character of a trait within a population (e.g., all non-pathological humans can learn language). Let me quote from Principles of Population Genetics:

...Genetically speaking, traits that are closely related to fitness...tend to have rather low heritabilities. Ignoring complications such as antagonistic pleiotropy...long term natural selection is expected to gradually reduce the additive genetic variance until the effect is balanced against the input of new mutations.

The narrow sense heritability of IQ is on the order of 0.30 to 0.80, so usually assuming 0.50 is a good rule of thumb. Here's an article from the same reporter:

Dr. Segal has found that identical twins were the most alike in their thinking, fraternal twins somewhat less so, and virtual twins strikingly different. When it comes to intelligence, for example, her research has found that only 25 percent of the differences between twins -- virtual, fraternal or identical -- can be accounted for by their environment, 75 percent by genetics.

Remember that IQ is a quantitative trait; its variation is controlled by many factors of small effect. A substantial proportion (in the range suggested above) of these factors are genetic. Where's the variation coming from? Perhaps pleiotropy and various forms of balancing selection are rolling the genetic architecture all through the G-matrix. Or, mutational pressure bubbling up in the genetic background, since intellectual ability is controlled by so many genes which can serve as "vulnerable" points. It's obviously going to be complicated, and no one has found QTLs of large effect yet. Perhaps complicated enough that people will just believe David Goldstein and look the other way and he can go on with his research bounded only by his curiosity :-) Anyway, here is some data from the GSS: 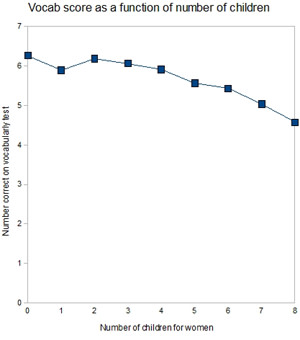 Now that's natural selection.... P.S. The photo is a little Pinkeresque, don't you think? Related:Jonah and Dan (and here) and John Hawks respond too.