David Attenborough, I salute you

We interrupt you regularly scheduled dose of news on peer-reviewed papers to bring you a short tribute to Sir David Attenborough. As I write this, the final episode of Life in Cold Blood, and thus the final episode of the entire "Life" series, has just finished airing on British telly. And what a climax it was - for anyone who hasn't seen it yet, you're in for a treat of caring mother caimans, bellowing alligators and a sequence of green turtle mating that was truly one of the most awesome pieces of natural history video I have ever seen. And I mean awesome in the traditional sense of the word, rather than the internet version. All of that has come at the end of yet another superlative series (this one, on my favourite animals - the unsung reptiles and amphibians), which featured baby chameleons, touchingly monogamous shingleback lizards, duelling king cobras and skin-eating caecillians. Sir David has been a hero and an inspiration to me since I was a child and his programmes can claim a fair share of responsibility for my current love of science and nature. He is a consummate communicator and a gentleman and it's truly telling that in an age of mindless celebrity, someone can still be so universally admired across all levels of British society, at the age of 81. I had the incredible pleasure of meeting him last year and talking to him over a lengthy lunch and the humble, down-to-earth persona that comes across on screen is very much present in person. He told marvellous stories, listened intently to everyone else's and classified the contents of his seafood platter. Later, he agreed to let me interview him ahead of the new series and you can read the full transcript of that encounter on the old site. The end of the Life series - some eight shows and 70+ programmes - is a sad moment, but I feel priveleged to have met the man before the final episode aired. 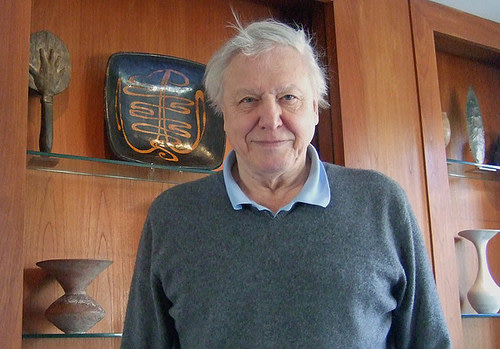