Dating a Dud? Blame It on Biology 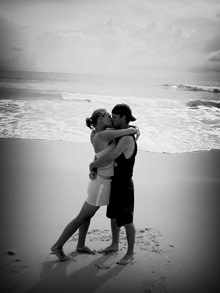 We know that women can look at a man’s face and judge whether he has the potential to be a good father. But looks can only go so far—it’s really your genes that matter. In the latest study on love and attraction, a group of scientists found that people in Europe and the U.S. choose partners with dissimilar immune cells, ultimately leading to children with stronger immune systems. The researchers measured the Major Histocompatibility Complex (MHC)—a large region of the genome linked to the immune system and body odor—of 30 European American couples, and compared them to 30 Nigerian couples. The Americans picked mates that had noticeably different MHC genes. The Nigerians however, didn’t appear to pick mates based on MHC at all. While previous experiments on fish, lizards and birds back up the finding that mate selection is affected by genetic factors/preferences, mate selection in humans isn’t as clear-cut. In a separate study, for example, researchers reported that women were more attracted to the smell of sweaty T-shirts worn by men who have similar MHC genes. And to further complicate things, we recently covered how women on birth control can be falling for the "wrong" (i.e., genetically similar) men because the pill affects a woman's sense of smell.