Borderline personality disorder is a severe personality disorder for which genetic research has been limited to family studies and classical twin studies. These studies indicate that genetic effects explain 35 to 45% of the variance in borderline personality disorder and borderline personality features. However, effects of non-additive (dominance) genetic factors, non-random mating and cultural transmission have generally not been explored. In the present study an extended twin-family design was applied to self-report data of twins (N = 5,017) and their siblings (N = 1,266), parents (N = 3,064) and spouses (N = 939) from 4,015 families, to estimate the effects of additive and non-additive genetic and environmental factors, cultural transmission and non-random mating on individual differences in borderline personality features. Results showed that resemblance among biological relatives could completely be attributed to genetic effects. Variation in borderline personality features was explained by additive genetic (21%; 95% CI 17-26%) and dominant genetic (24%; 95% CI 17-31%) factors. Environmental influences (55%; 95% CI 51-60%) explained the remaining variance. Significant resemblance between spouses was observed, which was best explained by phenotypic assortative mating, but it had only a small effect on the genetic variance (1% of the total variance). There was no effect of cultural transmission from parents to offspring.

The book Evil Genes focused to a large extent on BPD. Here are some correlations across relatives for this trait: 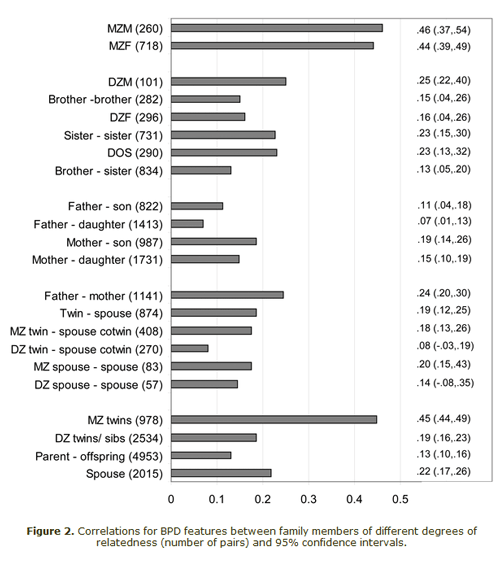