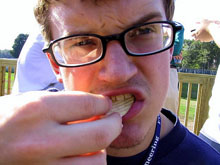 Ig Nobel Prize winners don't get a photo-op with the King of Sweden, or their own petition for Obama, but their discoveries are worth a good laugh and some serious consideration. Here's some of the wackiest science honored by this year's Ig Nobel Prizes. The full list of winners, announced last week by the Annals of Improbable Research (AIR), can be found here. Biology: Fleas living on dogs jump higher than fleas living on cats. Three French scientists measured fleas jumping out of plastic pipes; the dog fleas outjumped the cat fleas by an average of 2.3 centimeters. Physics: "String theory" agrees with Murphy's Law. Two Americans tumbled string in a make-shift clothes dryer and identified all the different knots that came out by their Jones polynomial. They mathematically proved that if you shake up a bunch of loose strings (or hair or shoelaces or headphone cords) they will inevitably get tangled. Chemistry: Coca-Cola may or may not be bad for your sperm. Three researchers at Harvard Medical School reported that Coke significantly reduces sperm motility and that Diet Coke just about wipes them out. Two years later, Taiwanese researchers reported that Coke has little effect on sperm motility. Both teams shared the prize. Medicine: Placebos that cost more will make you feel better. MIT researchers gave fake pain-relieving pills to healthy volunteers, telling half that the pills cost $2.50 each and the other half that the pills cost $0.10 each. After receiving electric shocks, volunteers who took the more expensive placebo reported feeling less pain. Cognitive Science: Slime mold can solve mazes. Japanese researchers locked Physarum polycephalum in miniature labyrinths and observed that, after first exploring all possible paths, the amoeboid organisms always settled on the shortest path between two points. Nutrition: Turns out we have an ear for food. Italian and English scientists asked volunteers to munch on potato chips while wearing headphones. The chips were rated crisper and fresher when the crunchy sounds were amplified through the headphones. The Fat Duck Restaurant in England may be onto something when they supply seafood diners with an iPod playing ocean sounds. Image: flickr/ nertzy