Could a Fetus's Genetic Disorder Be Cured by Mom's Stem Cells? 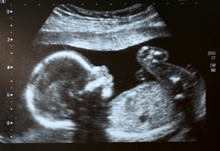 Talk about early intervention. One day, a fetus with a genetic disease may be able to get treatment before it even leaves the womb--and that treatment will come in the form of an extra gift from mom. While this scenario will only come to pass if new mouse research can be translated to humans, the finding are exciting. The new work solves a medical mystery. When researchers realized they could diagnose a fetus with certain genetic illnesses as early as the first trimester, they plunged into the search for in utero treatments. Ailments like sickle cell anemia and some immune disorders might be treatable with blood stem cells taken from a donor's bone marrow, researchers thought: the transplanted cells would multiply and populate the fetus's bone marrow with healthy blood-forming cells, and the fetus's immature immune system wouldn't reject the foreign entities. But when researchers tried such transplants, they didn't work.

“The fact that fetal stem cell transplantation has not been very successful has been puzzling, especially given the widely accepted dogma that the immature fetal immune system can adapt to tolerate foreign substances,” said co-senior author Qizhi Tang.... “The surprising finding in our study is that the mother’s immune system is to blame.” [press release]

The research team behind the current study

, published in The Journal of Clinical Investigation, realized that the mother's immune system was rejecting the transplants. They figured it out by examining the blood of a fetal mouse, and determining that up to 10 percent of the blood cells came from the mother--a surprisingly high figure. Then they monitored the blood of the mouse fetus during a stem cell transplant, and watched maternal immune cells rush to the transplant site. When they tried the procedure again with mouse moms who lacked the immune T-cells

, the transplant worked. Once they'd figured out the problem, it was easy to find the solution. The researchers harvested blood stem cells from the mouse mom and transplanted them into the fetus, and watched as the cells successfully settled down in the fetus.

"This research is really exciting because it offers us a straightforward, elegant solution that makes fetal stem cell transplantation a reachable goal," said senior author Tippi MacKenzie at the University of California, San Francisco. [AFP]

But there's still a long way to go before these mouse results can help humans.

"The critical question is how this applies to large animals and humans," says Alan Flake, a pediatric surgeon and the director of the Center for Fetal Research at the Children's Hospital of Philadelphia. Part of the issue with humans is that even when adult stem cells do survive in the fetus, it's difficult for them to compete with the resident fetal stem cells, which can proliferate much more rapidly. [Technology Review]

To answer such questions, the research team will keep studying the interactions between the mother's immune system and her fetus. They also hope to try the improved transplant procedure on monkeys. Related Content: 80beats: Blood Test Scores High on Detecting Down Syndrome

80beats: Doctors Work Towards Womb Transplants–But Are They Ethical?

80beats: In Rare Cases, Cancer Can Pass From Mother to Unborn Child