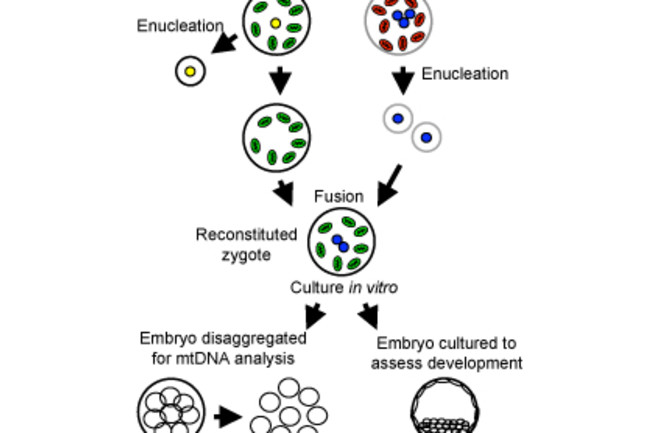 The good news: By combining the DNA of parents with genetic material from a third person, scientists might have developed a way for women with rare genetic disorders to have healthy children. The bad news: The ethical complications involved are so messy that it might be a long time coming. The researchers outline their work in a study in this week's Nature. On the surface, the idea is fairly simple. They took the nuclei out of the father's sperm and the mother's egg, and transplanted them into a donor's egg cell that had its nucleus removed, but whose mitochondria remained in the cell's cytoplasm. What you get is the genetics of both parents, plus the mitochondrial DNA of the host. This technique was pioneered in monkeys last summer, but researchers have now done a proof-of-principle study with human cells. Mitochondria are often called cellular power plants, because they provide most of the cell's energy. They also contain their own batch of so-called mitochondrial DNA that can, when mutated, give rise to disease.

"What we've done is like changing the battery on a laptop," said lead author Professor Doug Turnbull. "The energy supply now works properly, but none of the information on the hard drive has been changed. A child born using this method would have correctly functioning mitochondria, but in every other respect would get all their genetic information from their father and mother" [BBC News]

. In the study, which used eggs that had been fertilized abnormally and so were not usable for in-vitro fertilization, Turnbull transferred 80 nuclei and found that 18 continued to grow beyond the eight-cell stage of division, suggesting that the manipulated embryos were viable. Only 2 percent of mitochondrial DNA transferred over to the new host, which is a big deal. People need about half of their mitochondrial DNA to be mutated to see the sorts of muscle and heart diseases the researchers are worried about. About one in 250 live births see some kind of pathogenic mutation in the mitochondrial DNA, which is passed from mother to child (that's why scientists often use it to trace back the maternal line).

"We've proved in principle that this sort of technique can be used to prevent transmission of mitochondrial diseases in humans," says Turnbull [Nature News]

. This Nature paper is just that, though: proof of principle. IVF clinic are not authorized to perform the procedure, and some scientists aren't as optimistic as Turnbull, saying the procedure may never be approved.

The resulting embryo would carry DNA from three parents, and to prove the technique could work in the clinic, scientists would have to try the technique in healthy human embryos -- a task that would be "impossible" due to the associated ethical issues [The Scientist]