Conquering the ICU atop Mt. Everest 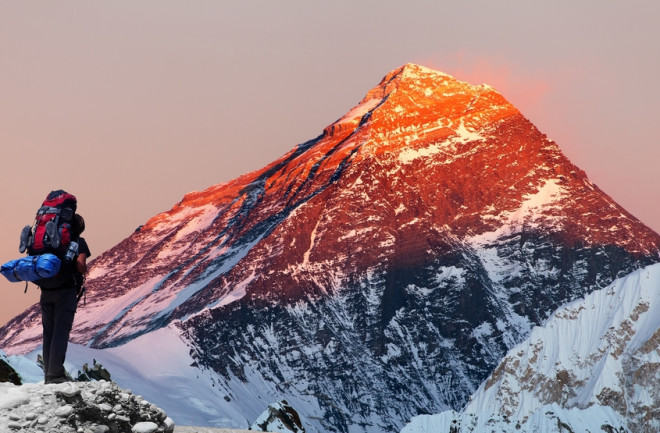 (Credit: Shutterstock/Daniel Prudek) A trek to base camp at Mount Everest will leave you short of breath in a hurry. A push to the summit begins in thin air, 17,000 feet above sea level — higher than any peak in the Rocky Mountains. Once you reach the "Death Zone," above 26,000 feet, oxygen levels drop to a third of what they are at sea level. Few climbers reach the summit, which rises 29,029 feet above sea level, without bottled oxygen. To acclimate their bodies to diminishing oxygen levels, climbers ascend Mt. Everest in stages over the course of weeks, reaching a series of camps at increasingly higher altitudes. The most common routes are akin to taking two steps forward and one step backward, as this animated map of Everest's South Col route illustrates: https://www.youtube.com/watch?v=diQtFPbBFCw Taking the summit incrementally gives the body time to adapt, and it will begin producing more red blood cells to transport as much oxygen as possible. This helps us, but it also serves to make our blood thicker, slowing it down. But Sherpa people, who have lived above the tree line for thousands of years, have adapted to a low-oxygen lifestyle. Studies of Sherpa people indicate their blood contains elevated levels of nitric oxide, a chemical that serves to dilate blood vessels, allowing more of it to pass through. They breathe more rapidly than normal, increasing the amount of oxygen flowing into their bodies. For the past decade, the United Kingdom-based Xtreme Everest project has endeavored to understand the various changes triggered in the body due to harsh conditions in high altitudes. Their research takes them to forbidding peaks, and has included an expedition to Everest's summit, gathering data along the way. They've traveled to Alps and the South Pole, looking at everything from changes in appetite and hydration to how children fare at high elevations. But their goal isn't to build better climbing equipment, or to scale mountains faster. Instead, they hope to take what they've learned in the clouds to improve outcomes for patients in intensive care units, whose bodies are faced with an equally daunting challenge. The latest results from Xtreme Everest add to the mountain of evidence highlighting the unique physiological adaptations of Sherpa people. The team tested muscle tissue and blood from both "Lowlanders" and Sherpas, and identified multiple adaptations that allow for extra energy production in adverse conditions. Their results were published recently in the Proceedings of the National Academy of Sciences.

The Xtreme Everest laboratory. (Credit: Xtreme Everest) To begin with, the Sherpas showed a preference for burning glucose over fat when it came to fueling their bodies. Glucose metabolism is more efficient, so it gives their bodies access to more energy on-demand. Muscle biopsies and blood tests also showed that their mitochondria use oxygen more efficiently when producing ATP — the enzyme that powers our muscles. Lowlander physiology mimicked Sherpas' after they had been exposed to high elevations for some time, but the Sherpas bodies performed the same way no matter where they were. Levels of phosphocreatine, which can act as a backup to mobilize muscles when there is no ATP, also increased while Sherpas climbed, but decreased as Lowlanders climbed to higher altitudes. This adaptation really set them apart, because it represented a completely new physiological reaction. There have been many studies of Sherpas and other high-altitude societies before, and these latest results only add to the list of beneficial adaptations such cultures possess. New here are the insights into energy production within the body and the cell; other studies have looked at everything from genetics to blood flow. One important element of their research has been hypoxia, or a critical lack of oxygen. Mountain climbers and critically ill patients alike face a potentially deadly lack of oxygen, and the team hopes that insights from mountain climbers can be translated to patients in the ICU.