Coming to America: Neglected Tropical Diseases Are Here (To Stay?)

Parasites and viruses once thought to make their homes exclusively in exotic locales beyond America's borders are now gaining a foothold in the country and they are exacting significant economic tolls and placing heavy burdens on health care systems. Neglected tropical diseases such as cysticercosis, echinococcus, toxocariasis, dengue, West Nile virus and Chagas have found their way into the country due to a synergistic combination of factors, including globalization, migration, trade and climate change. Two weeks ago I attended a symposium in New Orleans, LA hosted by Research!America to discuss the issue of emerging neglected tropical diseases (NTDs) in Louisiana and the southern United States, and to highlight the need to increase both public awareness and research efforts. University professors, research scientists and public health authorities from the state and beyond urgently spoke of the dawning reality that the “neglected” status of these debilitating diseases may not, indeed must not remain accurate for long. 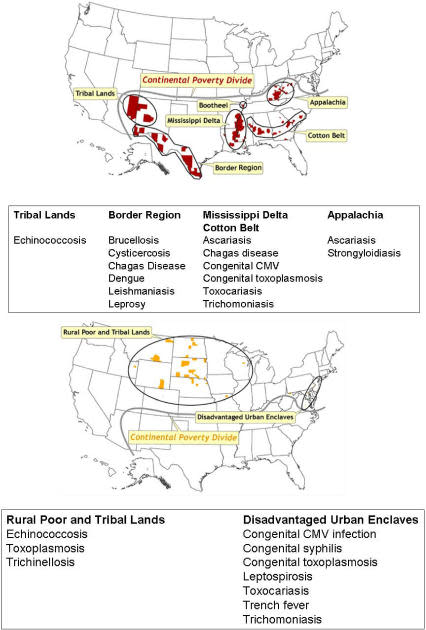 American counties with clusters representing poverty rates at least two standard deviations higher than the national mean. Boxes include the neglected tropical diseases endemic to those regions. Image: PJ Hotez (2011) Neglected Infections of Poverty in the United States of America. PLOS NTD. 2(6): e256. Accessible here. Already these parasites and viruses affect an estimated 1.4 billion people worldwide and are distinguished by their capacity to disfigure and disable if left untreated (1). Some of these viruses and parasites can cause long term internal organ damage, brain damage, blindness and seizures. Their presence in the US bespeaks a great need to increase epidemiological surveillance of the pathogens, their insect vectors and animal hosts, to aggressively treat cases of disease, to develop new medical treatments, and to ensure greater public awareness. Certainly America has the requisite insect vectors, the climate and the ecology to support the presence of these diseases and, of course, a susceptible human population to become infected. Poverty is one of the greatest risk factors for acquiring a NTD and that too is also present in the United States, particularly in the South and among minority populations. One point repeatedly made during Research!America's symposium was that decreased federal surveillance and research due to widespread budget cuts stands in the way of tackling the emergence and spread of NTDs in the US (1). In Laurie Garrett’s book on the collapse of global public health, “Betrayal of Trust,” she noted that “public health infrastructures [are] not terribly resilient; in the face of societal stress and economic difficulty they quickly collapse (2).” 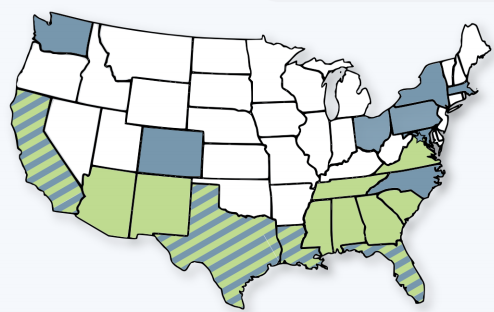 States with a documented cases of a neglected tropical disease (NTD) are in green, states conducting NTD research are in blue and states with both a case of NTD and facilities conducting NTD research are mixed. Image: Research!America. Click for source. The 2008 recession, with the widespread crash in employment that accompanied it and the slashing of government funding that continues today, has impaired the capacities of public health departments around the country to adequately provide for the prevention of and response to infectious diseases. At the present state, NTDs will continue to percolate unnoticed through existing insect vectors and the human population. Adequate public health infrastructure and research is imperative to slow their emergence and spread.

Chagas disease is an excellent example of a disease making a new home in the US. Dubbed “the new HIV/AIDS of the Americas,” the Chagas parasite is spread through infected triatomine bugs, known as “kissing bugs” for their proclivity to nibble near the mouth. As Loyola University biology professor Dr. Patricia Dorn noted during the symposium, the bugs are “badly mannered” feeders. The bugs defecate near their bites and the parasites are introduced when people inadvertently rub the feces into their bite wounds. The parasite goes on to infect the heart, esophagus and colon, and can lead to chronic heart failure and serious intestinal complications.

Over the past decade or so, the triatomine bugs, which are found in more than half of the continental US, have slowly but surely become infected with the Chagas parasite as they feed upon infected people and then go on to transmit the infection. Up to 55% of triatomine bugs in the US may already harbor Chagas and we are already seeing the effects of the disease in America: the CDC estimates that 300,000 people have the disease, 315 babies are born with Chagas every year, and hospitals in Los Angeles have found that the prevalence of the parasite in heart failure patients rose from 4% to 17% from just 2001 to 2010 (3)(4)(5). This is, simply, an outrageous statistic.

American states with reported findings of triatomine bugs, the insect vector of Chagas disease. Image: CDC. Click for source. Of course, an unpleasantly chronic, difficult and expensive disease in the population has onerous financial implications. Just this year, an article in the medical journal The Lancet found that it costs $118 million every year to treat chronic Chagas patients, while the impairment of these workers results in economic productivity losses as high as $864 million annually (6).

How else are NTDs affecting the States? In Los Angeles, an estimated 10% of all people visiting the emergency room for seizure events have been found to be infected with neurocysticercosis, an infection of the brain with the pork tapeworm parasite Taenia solium (7). At the southernmost tip of Texas, over 40% of residents in Brownsville were found to show past evidence of dengue infection (8). In the 1980s, residents in Louisiana were found to be widely infected with toxocariasis, a disease associated with developmental delays and asthma and spread by dogs and cats, yet comprehensive surveying has not been performed since and the prevalence of this infection in the population is unknown.