Chronicle of a Death Foretold: Human Sentinels for Disease Outbreaks

The bodies of dead crows were found littered through back yards, overgrown meadows, and public parks. We like to attach meanings to events, to craft symbols out of the mysterious and unknown. Birds, in particular, are favorite auguries of ours. These mass crow die-offs were an ugly, sinister sign - what could this mean, mass deaths of creatures customarily seen as living omens of death and the plague?

Unusual as it is, dead animals dropping from the sky isn’t uncommon. But the crows were different. In the summer of 1999, the massive die-off of Corvus brachyrhynchos heralded the entry of West Nile Virus (WNV) into the northeastern United States and its ensuing epidemic. Shortly after reports of clusters of dead crows crept into local health departments, news of a curious encephalitis sending many people to the emergency rooms in New York, New Jersey and Connecticut started popping up. 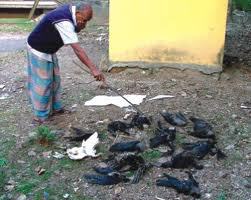 A flock of dead crows found in the state of Jharkhand, India in December of 2011. Crows can be susceptible to many avian viruses that threaten humans; in this case, these crows tested positive for H5N1 infection. Click for image source.

It is presumed that WNV had arrived from Israel, incubating in mosquito eggs hidden in rubber tires destined for transport to the United States. Local birds were soon infected by these foreign mosquitoes, then local mosquito populations acquired the virus by feeding on infected birds and soon the infection was introduced to Americans enjoying their summer outdoors. Now Americans had a novel type of sentinel, joining the sun, the sizzling barbecue and humid nights: when WNV sends people to emergency rooms around the country, we have unequivocal proof that summer has arrived.

Certain species of animals are sentinels for particular viral diseases; clusters of their deaths are red flags for emerging outbreaks and bioterrorism events that may soon spread to humans. The use of animals for this purpose can go beyond the canary in the coal mine, serving as bright flashes of information in uncertain times. Strangely acting horses can alert veterinarians to eastern equine encephalitis and Hendra virus, two very nasty viruses that are fatal to both humans and horses. Gorilla families hemorrhaging to death in Uganda can portend the emergence of Ebola in a nearby village. When pigs in Malaysia and Bangladesh are found coughing, slumped in mud, Nipah virus might soon make its leap into humans.

Depending on their profession, humans can be sentinels for outbreaks too. Many people ought to consider themselves lucky to work at a desk, rather than working face-to-face everyday with dozens of strangers or animals. When clusters of emergency room physicians and nurses, EMTs, or veterinarians multiply fall ill from odd illnesses, the CDC sits up and pays attention.

The local Red Cross team in Kikwit, Zaire, during the Ebola VHF outbreak in 1995. This team ventured into homes in the area to bring patients with suspected Ebola viral hemorrhagic fever to the Kikwit hospital, as well as to remove corpses. Source: Unknown.

In Zaire in 1995, entire teams of medical professionals, from hospital technicians to nurses to physicians, succumbed to the newly emerging Ebola virus; over 70% of the initial cases were nosocomial, hospital-borne infections among medical personnel (1). Since 1994, a series of sporadic outbreaks of the respiratory Hendra virus among horses have infected horse trainers and veterinarians in Australia, killing at least three people (2). The H1N1 pandemic in the spring of 2009 infected over 25% of medical professionals working in both the adult and pediatric emergency departments, significantly eclipsing the infection rates of other hospital departments (3). Most recently, the measles epidemic in New Zealand last fall spread to ambulance workers; a quarantine was implemented in one company to prevent spread to future patients and medical staff (4). An amplification of an infectious disease among medical professionals working on the front-lines of medical care is, unluckily, just another occupational hazard.

What other occupations might find themselves unintentionally waving this epidemiological flag? Flight attendants busily crossing the globe on international flights, handing out meager rations of peanuts to travelers. Bartenders and waitresses hurrying away in busy restaurants in major urban cities. Bushmeat hunters searching for wild game and loggers working in old-growth jungle and rain-forests, exposing themselves to fleeing animals and mosquitoes harboring unknown viruses. Hustling prostitutes. Teachers in elementary schools fending off the sticky hands of their students.

Hundreds of pigs culled during the Nipah epidemic in Malaysia in 1999. Image: BBC News Online. Click for image source.

This concept of human sentinels is crucial in light of the changing landscape of of diseases today - SARS, Nipah virus and Hendra virus are all diseases that have emerged as significant public health threats only in the past few decades. Zoonotic of origin, these guys love to flip back and forth between humans and wild and domestic animals in their natural transmission cycle. In a sense, outbreaks in certain occupations that traverse the line between the domesticated world and the wild can serve as a “yardstick” for measuring the health and stability of their surrounding ecosystem, an indicator of environmental disruption that encourages transmission of zoonotic diseases (5).

That wild and domestic animals may announce the onset of a zoonotic outbreak in humans is the very reason that public health agencies long for close working relationships between veterinarians and local health agencies. Shaping an effective disease surveillance program requires looking two-ways, at diseases and deaths in both humans and animals. Thankfully, we have a few existing groups that can pinpoint the origins of emerging diseases - the ProMed emails alerts of unusual disease incidences and outbreaks, the One Health initiative looks at human, animal and environmental health, along with the emerging viral research by the Global Viral Forecasting Initiative. Instead of looking to the skies for signs, we can take an interdisciplinary approach to disease surveillance by looking around us. Check out the resources below for some of the organizations doing just that.

ProMed Mail sends email alerts on the latest infectious diseases and epidemics around the world.

The Global Avian Network for Surveillance or GAINS surveillance system has an electronic database of over 100,000 birds that monitors avian health worldwide, specifically the transmission of flu viruses among wild birds.

The Canary Database is an online database for biomedical research examining animals as sentinels of zoonotic, environmental, and toxic effects that are applicable to human health. It is pretty thorough and a great reference site. I’ve certainly had my fun tooling around on it.

Additionally, read this rather upsetting article from the Journal of Infectious Diseases describing the Ebola outbreak in Zaire and the difficulties in diagnosing the disease as, one by one, medical personnel died from the hemorrhagic fever.