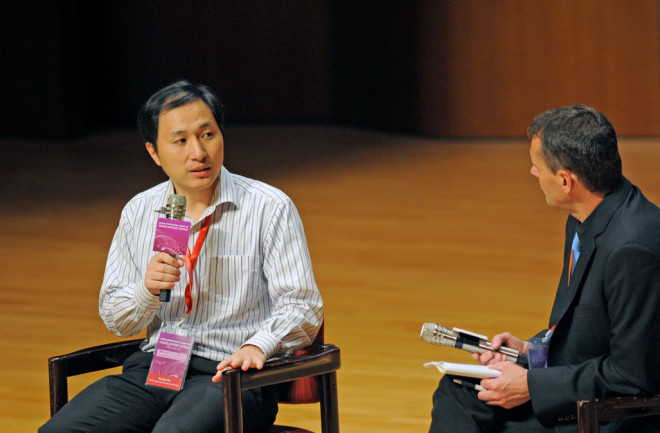 He talks to Matthew Porteus of Stanford during a panel talk following his presentation. (Credit: Ernie Mastroianni/Discover) HONG KONG -- Chinese researcher He Jiankui, who claims to have edited the genomes of twin infant girls to protect them from HIV while they were embryos, presented his work today at a conference at the University of Hong Kong. The controversial claim was first reported Sunday by the The Associated Press and through a series of YouTube videos, though no paper has yet been published, and the twins, called Lulu and Nana by He, have been kept out of public view. The announcement immediately brought condemnation from many scientists, who say the work was premature. He took the stage Wednesday at the Second International Summit on Human Genome Editing to an auditorium packed with scientists and journalists. Molly Galvin, the executive communications director for the National Academies of Sciences, had run out of official media badges, so most of the 200 journalists spotted had white sticky badges that simply said "Press" in blocky letters. When He strode onto stage, he was greeted with polite applause and a handshake from Robin Lovell-Bridges, one of the conference organizers. His scientific presentation proceeded with slides and explanations of his work. During a panel talk afterward, He again reiterated his opposition to using CRISPR for genetic enhancements, a common worry among scientists. He also revealed a second possible pregnancy in response to a question.

Journalists, researchers and other attendees packed the auditorium at the University of Hong Kong. (Credit: Ernie Mastroianni/Discover) During his talk, He explained the basics of his work, which involved selecting couples with HIV-positive fathers to receive in-vitro fertilization treatments with the goal of using CRISPR to then edit the resulting embryos. Based on earlier reporting, He appears to have first isolated sperm and egg from each couple and then inserted a single sperm into a single egg to create an embryo. Then He performed what he called “gene surgery” and added the gene editing tools to the fertilized egg. By disabling a gene known as CCR5, the technique should provide protection against the HIV virus. A pair of twins resulting from the procedure was born a few weeks ago, according to He. During his talk, He stressed that his team went to lengths to ensure that so-called "off-target effects" — edits to unintended genes — weren't present, including sequencing both the parents' genomes before the procedure and the embryos' before being implanted in the mother. He also maintained that the parents enrolled in his trial were aware of the specifics of the procedure as well as its ramifications. Some scientists have criticized He for what they see as a failure to adequately inform patients of what he intended. For example, consent forms for the trial listed it as an "AIDS vaccine development" program, reports the AP.

He said in his talk however, that the patients were informed of what the procedure entailed. Additionally, when they discovered a potential off-target effect that was unlikely to cause, harm the parents were notified, and they elected to implant the embryo anyway.

Jennifer Doudna, a pioneering CRISPR researcher from Stanford, listens to the presentations at the genome editing summit in Hong Kong. (Credit: Ernie Mastroianni/Discover) Despite He's reassurances, many scientists at the presentation expressed deep concerns about the project. Jinjiu Huang of Sun Yat-sen University, who spoke on blood disorders, read from a final slide in his presentation. “We strongly condemn any gene editing on human embryos for reproductive purposes.”William Hurlbut, a Stanford ethicist who has known He for a few years, also registered his worries. “[He] came to see me several times in past years,” he told Discover. “We talked about implications and ethical concerns. For what it’s worth, I think he’s got sincere intentions but I don’t agree with him.” George Daley, Harvard Medical School Dean and a conference organizer, spoke to the assembly Wednesday before He. “Just because the first step is a misstep, this should not lead us to stick our heads in the sand,” said Daley. “Clinical trials are still required,” and stressed the necessity of transparency, peer review and oversight. Perhaps the most notable of those who heard He speak Wednesday were CRISPR pioneers Jennifer Doudna of UC-Berkeley and Feng Zhang of the Broad Institute. When asked if he ever anticipated a scientist would do what He had done, Zhang said no. “A major issue was his complete lack of transparency. No one knew. Not even his institution. That is not how science works,” said Zhang. “Scientists are open to peer review, receiving criticism, and finding the truth,” he told Discover. -Additional reporting by Nathaniel Scharping