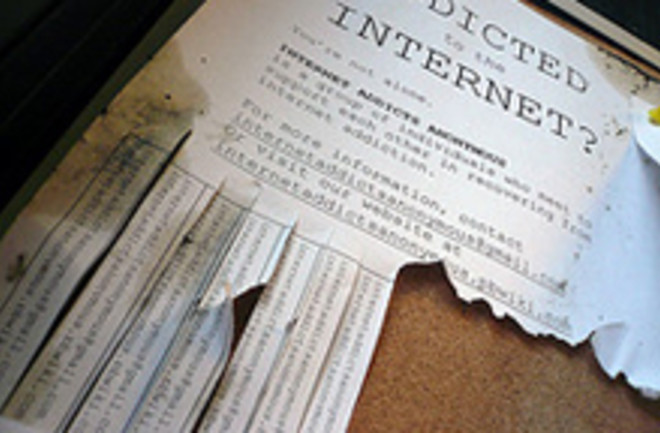 The Chinese government has banned the controversial use of electroconvulsive therapy, or shock therapy, to treat the controversial diagnosis of "Internet addiction." With an estimated 300 million Internet users, China has been grappling with how to keep avid Web surfers from spending their whole lives online, and various

clinics have sprung up, offering parents the chance to "cure" their children of the uncontrollable urge to blog or play online games [Telegraph].

But a recent scandal involving a psychiatric hospital in Shandong province that was using a "brain-waking" treatment of electric shocks has rallied public opinion against such clinics. China's Ministry of Health has now posted a notice on its Web site stating that there is no evidence that electric shock therapy is an effective treatment for Internet addiction.

A hospital spokeswoman last week said "sensationalized" media reports had already led it to cease the shock treatment. The shocks were meant to cause subjects to associate a negative result with Internet use, according to the hospital [ComputerWorld].

People who were subjected to the treatment report that they were forced to apologize for and repudiate their Internet-using ways while receiving the shocks, which were also used as punishment for uncooperative behavior.

In what might be an indication of the clinic’s effectiveness, its practices came to light when former patients went online to complain [The Wall Street Journal].

For 17-year-old Teng Fei, his ordeal started when

"my mum saw the adverts on television. They demonised the internet and after watching them she believed I was sick and it was very serious." ... When Teng Fei's mother told him that his dad had been taken ill the horrified teenager rushed straight to hospital. But it was a ruse and within hours he underwent the painful treatment. He was given ECT many more times in the following weeks [The Guardian].

The teenager's father eventually became disillusioned with the program and withdrew his son, who says he still uses the Internet plenty--although he doesn't believe that's a problem. There is considerable debate on whether Internet addiction is a real syndrome. In the United Kingdom, a recent survey of 1,300 intensive users came to the conclusion that

addicts are those who spend at least six hours online a day and have shown at least one from a range of symptoms including a yearning to get back online, fear of social contact and difficulty concentrating or sleeping [The Guardian].

Related Content: Discoblog: They Tried to Make Us Go to Web-Surfing Rehab but We Said LOL 80beats: China’s Internet Users Force Government to Back Down on Censorship 80beats: Some Kids Are “Pathologically” Addicted to Video Games, Study Finds