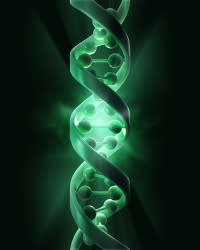 Chemotherapy is poison that happens to kill cancer cells faster than it kills healthy cells; that it wreaks havoc on the bodies of patients is unsurprising. But chemo may also affect their unborn children. According to a new study in PNAS, the offspring of mice treated with chemotherapy have higher rates of mutation

, even though the offspring themselves were never exposed to the drugs. The results suggest that these mutations arise from genome destabilization caused by exposure to chemo, rather than just mutated sperm from the treated father. Male mice in the study were exposed to one of three common anticancer drugs---cyclophosphamide, mitomycin C, or procarbazine---and then allowed to mate with untreated females. After sequencing a small piece of DNA from the offspring, the researchers found that mice with treated fathers had mutation rates up to twice that of mice with untreated fathers. Notably, these mutations were present in DNA inherited from both the treated father and untreated mother. What this likely means, according to the researchers, is that chemotherapy induces epigenetic

changes in the sperm. Epigenetic changes don't affect the underlying DNA sequence, but they alter chemical tags that control how genes are expressed. This in turn lead to genome destabilization in the offspring, allowing sequence mutations to arise in DNA from the mother or father. The exact mechanism for genome destabilization and how it's inherited is unknown. Lead author Yuri Dubrova is also cautious about how this data translates to humans. Since most cancer patients are too old to reproduce or are sterilized by treatment, childhood cancer survivors seem to be the only group this can potentially affect. Because of their short life span, the mice in this study reproduced only a few months after chemotherapy, but humans would likely have years in between. If the phenomenon applies to humans though, the nasty effects of chemotherapy might be longer-reaching than we realized. [via Nature News