At Discoblog, we do our best to keep the party going. So, even as we lurch back into existence after St. Paddy's celebrations, we are looking forward to our next big party--which just might be the iPad launch party next month. So, here's an idea for Apple-themed party food, courtesy Chef Ken at The Cooks Den. There's nothing like a cheese plate to make an occasion feel festive. For this recipe, you will need: * 1 Steve Jobs Cheese Head * Assorted gourmet cheeses such as brie, camembert or stilton * Crackers * Fruit 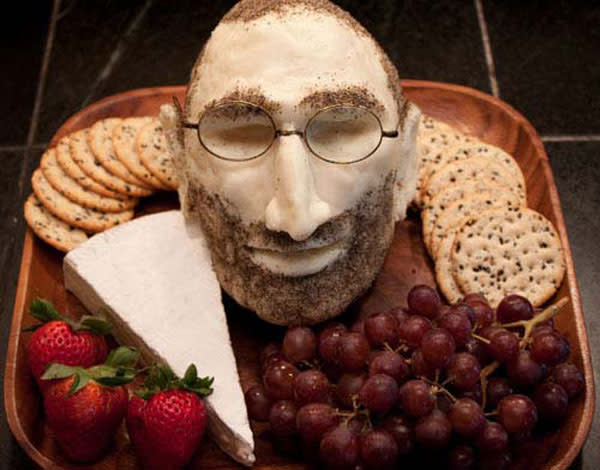 Oh! You're not familiar with the culinary marvel known as the Steve Jobs Cheese Head? Forgive us. Chef Ken created this perfectly crafted head of the Apple CEO from a block of mozzarella; the chef thinks mozzarella works best, since the color of the cheese matches His Steveness's pasty white pallor. It's pretty simple to create this cheesy replica of a Jobs head. For step-by-step instructions, go here. Once your Steve Jobs Cheese Head has been lovingly crafted, place it on fancy plate, arrange crackers, pieces of fruit, and assorted cheeses, and serve to your guests. Chef Ken also suggests serving Jobs's head as part of a nacho concoction or in a fusion dish he calls iPad Thai. Hey, the Steve Jobs Cheese Head goes with anything. 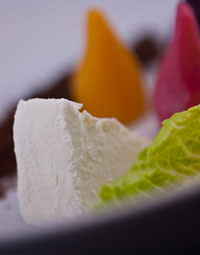 But if by some weird chance the Steve Jobs Cheese Head does not grab your interest, you might also consider serving cheese made from breast milk. This all-natural creation was pumped to existence when chef Daniel Angerer's wife realized she had a lot of extra breast milk lying around in packets, cluttering the freezer. But instead of throwing the excess milk out and wasting "gold," as Angerer terms it, he turned it to cheese, much to the delight of other moms who are now asking for more breast milk recipes. They want to use their extra milk to make ice-cream, milk shakes, and other stuff that can be fed to fussy eaters. We aren't really sure what sort of party would call for the serving of breast milk cheese--but Angerer has helpfully provided detailed instructions from his "Mommy's milk cheese making experiment" for anyone who wants to follow his example. Related Content: Discoblog: NCBI ROFL: St. Paddy’s Day special: Surprise! Drinking makes the Irish more aggressive! Discoblog: Honoring St. Patrick: Guinness Bubbles Demystified and Why Your Hangover Hurts Discoblog: A Giant Leap for Cheddarkind: Brits Launch Cheese Into Space Discoblog: Caution: Your Cheese Grater May Be Radioactive, Study Finds Discoblog: Cooking with Joel Stein: How to Eat a PlacentaImages: The Cooks Den, Daniel Angerer