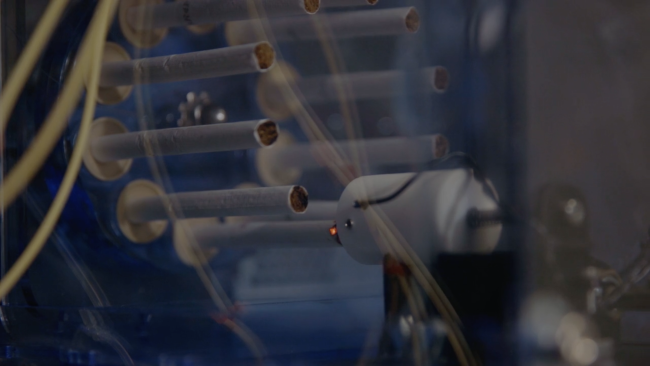 Going all the way back to poor John Henry, robots have proven that they can outperform humans. And now, researchers have designed a robot that would leave Patty and Selma gasping for air. Researchers studying the effects of cigarette smoke on our lungs have struggled to find a good model for their research. Most animals used for research breathe only through their noses, it's difficult to expose cell cultures to realistic smoke, and there's often too much variability between human test subjects to get reliable results. Now, scientists from Harvard University think they have found an ideal stand-in for their research. They combined a robot built to smoke cigarettes with a human lung-on-a-chip to yield the combination of a realistic environment and a controlled subject that they've been looking for. 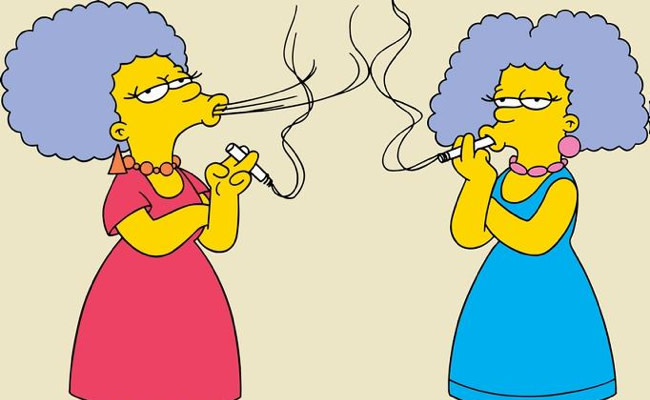 Smoking Without the Guilt

The robot is composed of a rotating cigarette holder and a small respirator that mimics taking a drag, holding it, and exhaling slowly. The researchers timed the inhalations to match up with those of regular smokers. The smoke is then funneled through a small chip lined with human epithelial lung cells (another channel on the chip provides the nutrients necessary to sustain the lung cells). Organs-on-a-chip provide researchers the ability to accurately mimic whole body systems, as opposed to simple cell cultures, making their experimental models much closer to what they are actually trying to study.

For their experiment, the researchers constructed lungs-on-a-chip from the cells of both healthy individuals and people with Chronic Obstructive Pulmonary Disease (COPD), a chronic inflammatory lung disease that restricts breathing. They exposed their lab-grown "lungs" to a healthy dose of robot-assisted cigarette smoke, and then watched to see how the newly minted smokers compared to their not-so-cool compatriots. They published their research this week in the journal Cell Systems.

First, the researchers looked at the patterns of gene expression they found in the lung cells exposed to cigarette smoke. In all, they found 335 significant changes caused by smoking, including the upregulation of genes that help to protect against oxidative stress. They say that the changes they found are consistent with other studies of gene expression in smokers, confirming that their model served as an accurate replica of the lung of a real human smoker. The changes they saw happened relatively quickly: After their robot smoked only nine cigarettes, the researchers saw the same genes upregulated as in regular smokers. Their next area of inquiry was the cilia that line our lungs — tiny hairs responsible for clearing bacteria-carrying mucus out of out lungs. A heavy smokers' characteristic cough is a sign that their lung cilia aren't working as well as they should be. Previous studies of smokers looking at the cilia had proved inconclusive, however. Using their new chip, the researchers say that they have found good evidence that the cilia become impaired after being exposed to smoke. While they still waved around about as much as healthy cilia on average, their waving was much less coordinated, and there tended to be more weaker cilia. This could readily lead to a build-up of mucus in the lungs and the tell-tale "smokers' cough." 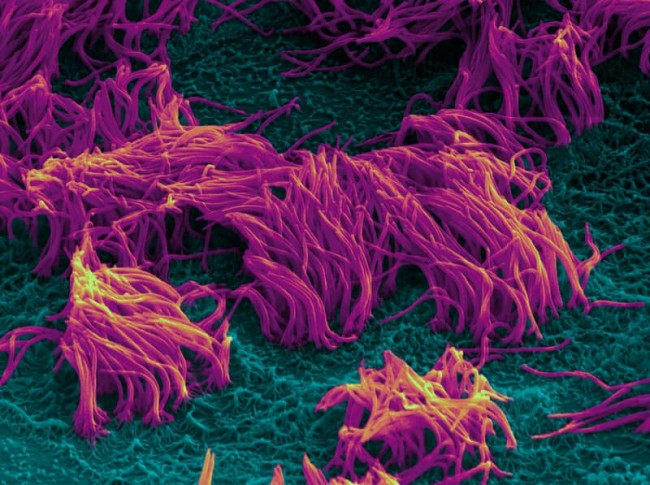 This image from a scanning electron microscope shows the lung cilia (colored here in purple) protruding from the lung epithelium. (Credit: Wyss Institute/Harvard University) When the researchers performed a genetic analysis of the lungs grown from the cells of people with COPD, they discovered a set of ten affected genes that are entirely new, they say. These genes appear to be the most heavily affected by smoking in COPD patients, and show that smoking causes different things to happen to the lungs of people with the disease. Their insights could lead to the development of new treatments for the disease. Following the path of many a modern smoker, the researchers eventually switched their robot to e-cigarettes to see if it could handle them as well as the traditional variety. It turns out that the electronic smoker took to electronic cigarettes just fine, and the researchers were able to judge the affects of e-cigarettes on their electronic lung as well. They found that the patterns of gene expression favoring protective mechanisms and the weakening of the cilia were absent with e-cigs, adding yet another piece of evidence that they might be safer. In a sense, we should really all be thanking this cigarette-loving robot. It's smoking so we don't have to.