Caught in the Hot Zone 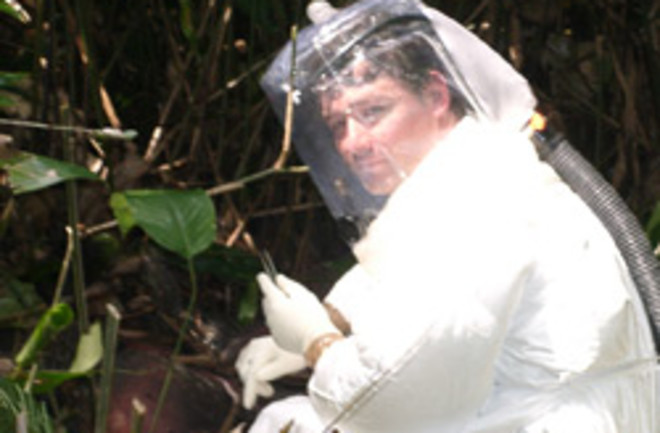 A suited scientist investigates gorilla carcasses (top). The skull of a gorilla killed by Ebola (below). | (Courtesy of Magdalena Bermejo)

During every recent human outbreak of the Ebola virus—which often causes victims to bleed to death—gorilla carcasses have turned up in nearby forests, but scientists were uncertain about the extent of the disease’s impact. New data confirm that these gorilla deaths are not isolated incidents but are part of a devastating wave of Ebola infections afflicting nonhuman primates.

Ebola has killed as many as 5,500 gorillas in Gabon and the Democratic Republic of the Congo since 2002, according to University of Barcelona primatologist Magdalena Bermejo. She and her colleagues documented the loss of hundreds of gorillas at their study sites.Overall, more than 90 percent of the animals surveyed died. Genetic testing of the carcasses confirmed Ebola as the culprit. Based on the size of the affected area, a quarter of the world’s gorillas may have been killed by the disease in the past decade. Gorillas aren’t the only victims; Bermejo estimates that the virus may have wiped out more than80 percent of the local chimpanzees too.

Some scientists had suspected that apes mostly caught Ebola from a virus-­carrying reservoir species, like bats or insects. The observed disease pattern strongly suggests the virus is also passing from ape to ape through direct contact, just as it has been shown to do in humans.

Strange as it sounds, this may be good news, says Peter Walsh,ecologist at the Max Planck Institute. Ape-to-ape transmission means that vaccinating groups could break the chain of infection. Multiple vaccines have already been shown to protect lab monkeys, Walsh says,adding that there is no time to lose in preparing a vaccination program for gorillas. Ebola alone may not drive the threatened giants to extinction, he says, “but it may push them onto a slippery slope tha will be very difficult to climb back up, because other factors are pushing too.”