Cancellation of Controversial Autism Study Causes Both Relief and Outrage 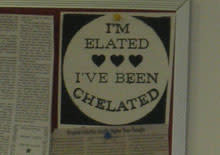 A federal health agency has dropped plans for a controversial autism study, pleasing many scientists but disappointing some families with autistic children. The study would have tested a treatment called chelation, which

removes heavy metals from the body and is used to treat lead poisoning. Its use as an autism treatment is based on the fringe theory that mercury in vaccines triggers autism — a theory never proved and rejected by mainstream science. Mercury hasn't been in childhood vaccines since 2001, except for certain flu shots [AP].

The National Institute of Mental Health had previously said that if the study proved that chelation therapy had no effect, if would have finally dismissed the "anecdotal reports" that the treatment is effective. But safety concerns based on recent animal studies apparently deterred the institute from continuing with the study.

"NIMH has decided that resources are better directed at this time to testing other potential therapies for autism spectrum disorders, and is not pursuing the additional review required to begin the study," the institute said [Reuters].

Safety concerns about chelation were raised following a study last year that showed it caused lasting brain problems in rats. Despite such findings, some autism advocates continue to believe in the treatment's benefits. News of the cancellation of the NIMH study caused one advocate to compare the risks of chelation to the side effects of chemotherapy.

Children are given huge doses of chemotherapy and radiation in a desperate effort to save them from cancer - fully knowing the side effects themselves can be deadly. It's a fair risk most parents are willing to take to help a sick child [Age of Autism].

In contrast, medical experts reacted with relief to the cancellation of the new study, which some had called a dangerous experiment on children.

"Suppose that a child suffers a severe side effect from chelation," said [Pediatrician Paul] Offit, author of "Autism's False Prophets," a new book on autism research. "Without any evidence it's helpful, I think it's unethical" [AP].