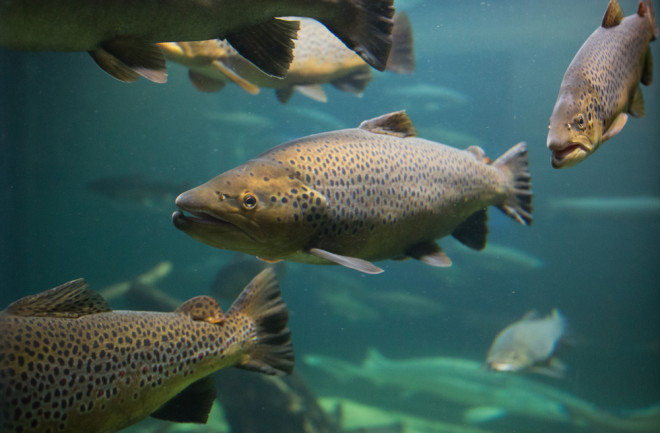 (Credit: Aristokrates/Shutterstock) After a protracted fight, salmon have become the first genetically modified animal to be sold in stores. The salmon, implanted with genes that boost their growth, come from the U.S.-based biotech firm AquaBounty Technologies, which has been attempting to gain regulatory approval for their product for some 25 years. Last week, AquaBounty announced it had indeed sold salmon fillets to customers in Canada after receiving regulatory approval in 2016, though it isn't clear where they were sold. They were approved here by the FDA in 2015 after extensive testing to ensure safety, a move that led almost immediately to a lawsuit against the regulatory agency on behalf of a consumer advocacy group. It has since blocked sales until guidelines for labeling can be established.

AquaBounty's salmon possess two extra genes. One, from chinook salmon, promotes growth, and another, from ocean pout, acts as a kind of switch to keep the gene active. Salmon normally only grow during certain seasons, but these continue to develop year-round. This allows them to reach maturity in around 18 months, as opposed to 28 or more for normal salmon. Tests by the FDA and Canadian regulatory agencies revealed no potential dangers from ingesting the fish. Nevertheless, two Canadian grocery store chains have pledged not to sell the GMO salmon, and Vigilance OGM, an environmentalist group, protested the use of Canadians as "guinea pigs." The more salient risks from the fish are those of environmental contamination. Some groups hold that the fish could pose a threat to wild populations of salmon, should they escape and interbreed with native populations. AquaBounty says that all of it's fish are bred to be sterile and are raised in indoor vats away from natural habitats, making any crossbreeding extremely unlikely.

Genetically modified products are already common in supermarkets, however, in the form of GMO fruits and vegetables and in many processed foods. Soybean oil, corn starch and other common food ingredients have been genetically engineered for years, mostly to make them more resistant to disease or to pesticides. In addition, papayas, milk, and other common products have also been genetically modified in some way. These crops have quietly become part of our diets, although there is still a push for mandatory labeling of GMO products, and the same could happen for modified animals. The move could also be a boon for wild salmon, who are dangerously overfished at the moment. Faster-growing salmon from fish farms would take the pressure off of populations in the wild and allow them to recover. How genetically-modified salmon will alter the practice of fish farming remains unclear, however. Aquaculture involves the use of certain toxic chemicals and antibiotics, which can leach into water supplies, and other wild fish are sometimes used as feed, threatening their numbers. AquaBounty's new salmon are projected to require 25 percent less feed than normal salmon, but the environmental effects of the fish farms they are raised on remain unclear. The genetic modifications won't contribute directly to hazardous runoff, but increases in aquaculture as a whole could pose a problem if not properly managed.