Can Stuffing Germs up Ferrets Unleash a Human Pandemic?

Don't believe the hype about the would-be killer flu.

The Claim: A lab-concocted strain of ferret flu could become a doomsday weapon or bioterrorist threat.

The Contrarian: Wendy Orent, author of Plague, says the much-hyped fears are unfounded: The new strain presents no danger to humans but reveals a great deal about the transmission of flu. 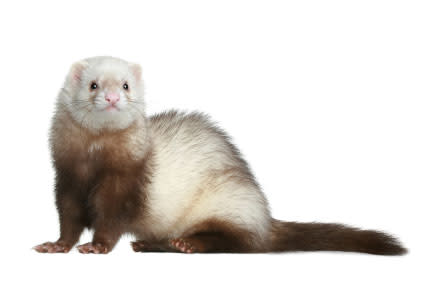 Ferrets with the flu sneeze and cough like humans. | iStockphoto

Deadly H5N1 avian flu, long entrenched in Asian poultry, has terrified public health experts ever since it killed a Hong Kong boy in 1997. The disease has caused about 340 human deaths in all, raising concerns it might someday unleash a true pandemic. But that has never occurred. The virus is adept at killing chickens and can infect mammals, but it has never spread among them. Until recently no one knew why.

Last year two scientists independently set out to learn what genetic changes might make H5N1 contagious (and so more dangerous) among mammals. Yoshihiro Kawaoka of the University of Wisconsin at Madison studied a hybrid flu virus made from the avian H5 and the human H1N1 pandemic flu of 2009. Ron Fouchier of Erasmus Medical Center in Rotterdam, the Netherlands, genetically altered his H5 strain by changing its receptors so the virus could infect cells higher in the respiratory tract. Then, they stuck their strains deep up the noses of ferrets.

By inserting nasal secretions from the first infected ferret into the nose of another and repeating that “passaging” from ferret to ferret, both teams allowed natural selection to choose the genetic variants of flu best at growing and spreading in ferrets. After 10 such passages, the virus was able to spread in the air, infecting ferrets in separate cages. Kawaoka’s ferrets got sick but survived, while 60 percent of Fouchier’s died. When the scientists sequenced the genome of the new virus and compared it with the original strain, they discovered about five changes that allowed ferrets to pass the germ on.

The results were accepted for publication, but the U.S. National Science Advisory Board on Biosecurity worried that Fouchier’s and Kawaoka’s work might be dangerous in the wrong hands. Members of the board demanded that the genetic recipe for ferret flu be redacted before publication, sparking public hysteria: Had the scientists created lethal, transmissible human viruses? Could the microbe accidentally escape from a lab or fall into terrorist hands to become, as a New York Times editorial called it, a “doomsday weapon”?

The uproar made no sense. The ferret experiments do not replicate a natural evolutionary process. Without the experimenters’ deliberately moving the viruses from ferret nose to ferret nose, a contagious strain would never have evolved. To make a deadly human flu, you would need to passage the strain among humans, not ferrets—a difficult and ethically impossible experiment.

Virologist Earl Brown of the University of Ottawa points out that passaging a virus from one animal to another increases the virulence of the germ for the newly infected species and decreases its virulence for the original host. Indeed, weakening influenza strains by passaging them in animals is an old technique for making human vaccines, including those for polio and yellow fever, according to virologist Vincent Racaniello of Columbia University. The ferret strains created in these experiments are probably closer to a human vaccine than a doomsday weapon.

This March the World Health Organization ruled that the articles should be published in full. That is a victory for science and medicine alike: The experiments teach us more about the genetics of disease transmission than ever before.

1. Find a chicken and steal its flu germ.

4. Let sit for four days. When the ferret sneezes, take the contents and stuff it up another ferret’s nose.

*To adapt this recipe to create a human pandemic or bioterrorist threat: Repeat instructions above, but replace ferrets with humans. Good luck.

Why a COVID-19 Vaccine Is Key For Returning to Normalcy