Calling Forth the Body's Own Stem Cells Could Speed Tissue Repair 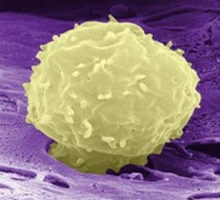 Researchers have coaxed a mouse into releasing a flood of stem cells from its bone marrow, and say these extra stem cells may then hustle off to repair damaged tissue. If this technique proves effective for repairing damage and can be transfered to humans, researchers say it could help mend everything from broken bones to damaged hearts. Says lead researcher Sara Rankin:

"Suppose a person comes in to hospital having had a heart attack. You give them these drugs and stem cells are quickly released into the blood. We know they will naturally home in on areas of damage, so if you've got a broken bone, or you've had a heart attack, the stem cells will go there. In response to a heart attack, you'd accelerate the repair process" [The Guardian].

Researchers say this approach would be a more direct and less controversial way to get stem cells to patients.

Instead of injecting patients with stem cells from donors, embryos or stem cell banks, doctors could simply inject the drugs and the patients would produce the cells themselves. This would avoid complications of tissue rejection and sidestep ethical objections to using stem cells originating from embryos. "It's promoting self-healing," says Sara Rankin.... "We're simply boosting what's going on naturally" [New Scientist].

In the study, reported in the journal Cell Stem Cell, researchers used two drugs to prompt the flood of stem cells. The first drug, a growth factor, spurred the mouse's bone marrow to produce more stem cells, while the second drug caused the cells to spill out into the bloodstream. Researchers have previously used a similar process to trigger the release of stem cells that grow into blood cells, but with this new drug combination Rankin's team provoked the release of mesenchymal stem cells, which promote the repair of bone and tissue, and epithelial progenitor cells, which stimulate the growth of blood vessels. Rankin says the next step is to test whether flooding the blood with these stem cells really does accelerate the repair of damaged tissue, but some experts say that it's far from certain that she'll get such a positive result. Says stem cell expert Paul Fairchild:

"Mobilizing those stem cells is an enormously important first step, but it's only a first step.... It's expecting an enormous amount for those stem cells to then find their way into a lesion, then to differentiate properly into the cell type that's required, to become integrated functionally and to survive" [CNN].