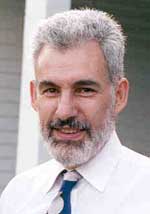 Bruce Winstein, an experimental physicist at the University of Chicago, passed away this morning. He had been fighting cancer. Bruce was a fantastic physicist and person. He became well-known as a particle experimentalist, forgoing giant collaborations to work in small groups where he could do something unique. He was the leader of the KTeV experiment at Fermilab, which measured the very subtle "direct" CP violation effect. He won the Panofsky Prize from the American Physical Society for this work. In an especially impressive move, he then decided that he wanted to switch fields, into cosmology. He took a sabbatical year and went to Princeton, where he basically worked as a grad student in Suzanne Staggs' lab, learning the trade of cosmic microwave background observations from the ground up. Then he came back to Chicago, where he started and was the founding director of the Center for Cosmological Physics, later the Kavli Institute for Cosmological Physics. Once that was up and running, he moved back into research full-time, becoming a leader of the QUIET collaboration. Bruce was a great friend, and a valued mentor while I was at Chicago. He was one of the few faculty members to reach out and invite me into his office when I arrived, and was always ready to talk about physics -- or music. He was a true audiophile, and connoisseur of jazz in particular. It was Bruce who introduced me to the music of Von Freeman (who just won the prestigious Rosenberger Medal from the University of Chicago). Bruce died far too young. We'll miss him greatly.