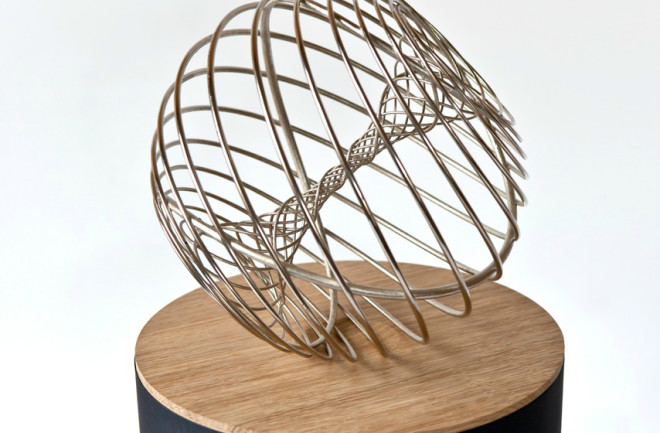 The Breakthrough Prize trophy. (Credit: Breakthrough Prize) During the 5^th Annual Breakthrough Prize ceremony, an affair with all the trappings of the Oscars, a handful of scientists in the fields of life sciences, physics, and mathematics became millionaires. Never before has more cash been placed in the hands of the world’s brightest minds. The event is the brainchild of Yuri Milner, a Russian-born internet entrepreneur who is now based (as might be expected) in Silicon Valley. Other founders of the Breakthrough Prize attended as well, including Sergey Brin of Google and Mark Zuckerberg of Facebook. Morgan Freeman served as host; Jeremy Irons was a presenter; Alicia Keys gave a “special performance,” and the entire spectacle was produced and directed by Don Mischer Productions, whose credits include the Oscars, Emmys and Super Bowl half-time shows. The glitzy nature of the affair was intended to give top-notch researchers the recognition and acclaim they deserve.

“The principal message is that intellectual achievement and fundamental science is important for our civilization and ought to be celebrated,” says Milner. “We’re trying to reach out to a lot of people. Our goal is to generate more public support for fundamental science and to get more young people excited.” Breakthrough Prizes in Life Sciences were handed out to five winners—Stephen Elledge, Harry Noller, Roeland Nusse, Yoshinori Ohsumi, and Huda Zoghbi—each of whom received $3 million—the world’s largest scientific award, at least in terms of monetary value. Three physicists—Joseph Polchinski, Andrew Strominger, and Cumrun Vafa—shared the $3 million prize in Fundamental Physics for work that made use of mathematical techniques from string theory to help illuminate different aspects of the universe, including black holes. Ronald Drever, Kip Thorne, and Rainer Weiss shared the $1 million Special Breakthrough Prize in Fundamental Physics for the development of the Laser Interferometer Gravitational-Wave Observatory (LIGO), which in turn led to the first detection of gravitational waves in 2015. An additional $2 million will be shared among 1,012 LIGO team members. Jean Bourgain won the $3 million Breakthrough Prize in Mathematics for his work in high-dimensional geometry, among other areas. Ten researchers shared six New Horizons in Physics and Mathematics Prizes of $100,000 each, which are given to promising young scientists at early stages in their careers.

In the Breakthrough Junior Challenge for high school students, 13 to 18 years old, Atonella Masini of Peru and Deanna See of Singapore were selected from more than 6,000 entries from 146 countries for explaining science in a creative way. Masini, who won in the Physics category, produced a video on quantum entanglement; See’s video, in the Life Sciences field, concerned antibiotic resistance among “superbugs.”

Each will win $400,000 in educational prizes—money that will cover their college scholarships, provide new, state-of-the-art science labs for their schools, reward their teachers, and support scholarship programs. Hillary Andales, also of the Philippines, captured a special prize, which will earn a new science laboratory for her school that was ravaged by a 2013 typhoon.

Milner hopes the Junior Challenge can give a big boost to a teenager interested in science. Last year, which was the first time the challenge was offered, Ryan Chester of North Royalton, Ohio won for a video that presented Einstein’s Special Theory of Relativity in a breezy, accessible manner.

He was subsequently honored in his hometown, as the mayor dubbed Feb. 8, 2016 “Ryan Chester Day.” Although Chester had planned on going to a state college in Ohio, he ended up going to Harvard. “This is the kind of celebrity we’re trying to achieve,” Milner explains. “The message is that science is cool and good for you. It can even make you famous.” And in some rare instances, apparently, it can even make you rich.