Epigenetics is making it "big time," Slatehas a review up of the new book Epigenetics: The Ultimate Mystery of Inheritance. In case you don't know epigenetics in terms of "what it means/why it matters" holds out the promise to break out of the genes → trait conveyor belt. Instead positing genes → trait → experience → genes, and so forth. Or perhaps more accurately genes → trait × experience → genes. Epigenetics has obviously long been overlooked as a biological phenomenon. But, I think the same could be said for the ubiquity of asexual reproduction and unicellularity! Life science exhibits anthropocentrism. That's why there's human genetics, and biological anthropology. My own concern is that epigenetics will give some a license to posit that the old models have been overthrown, when in fact in many cases they have been modified on the margin. Especially at the level of organisms which we're concerned about; human-scaled eukaryotes. Humans most of all. The last paragraph in the review highlights the hope, promise, and perils of epigenetics in regards to social relevance:

It's almost enough to make one nostalgic for the simplicity of old-style genetic determinism, which at least offered the sense that the genetic hand you were dealt at birth was the same one you would play your whole life—except that epigeneticists hold out the promise that the blessings of a single life, too, can be passed on. Disease researchers, Francis reports, have hopes that the effects of abnormal epigenesis may be reversed. For example, it's possible that the damage caused by many cancers is epigenetic. If those epigenetic attachments can be altered, then it's possible the cancer can be stopped. Still, even if we are discovering that an extraordinary range of conditions may be epigenetic, not all of them are. There are still specific diseases that follow a deterministic path. If you are unlucky enough to draw the Huntington's mutation in the genetic shuffle, you will develop the disease. Francis rightly emphasizes the wonder of epigenetics and the molecular rigor it brings to the idea that life is a creative process not preordained by our genome any more than it is preordained by God. Yet even as epigenetic research invites dreams of mastery—self-creation through environmental manipulation—it also underscores our malleability. There is no easy metaphor for this combination. But if we must have one, we should at least start with the cell, not the gene. The genome is no blueprint, but maybe the cell is a construction site, dynamic, changeable, and complicated. Genes are building materials that are shaped by the cell, and they in turn create materials used in the cell. Because the action at the site is ongoing, a small aberration can have a small effect, or it can cascade through the system, which may get stuck. Recall that your body is a moving collection of these building sites, piled in a relatively orderly way on top of another. Malleability? It's an ongoing dance with chaos, but, incredibly, it works.

If people have a hard enough time with the concept of heritability, I have no idea how they'll deal with heritability of epigenetic modifications! In science itself epigenetics has really come to the fore over the last 10 years. Here's a plot which shows the change over time in the scientific literature: 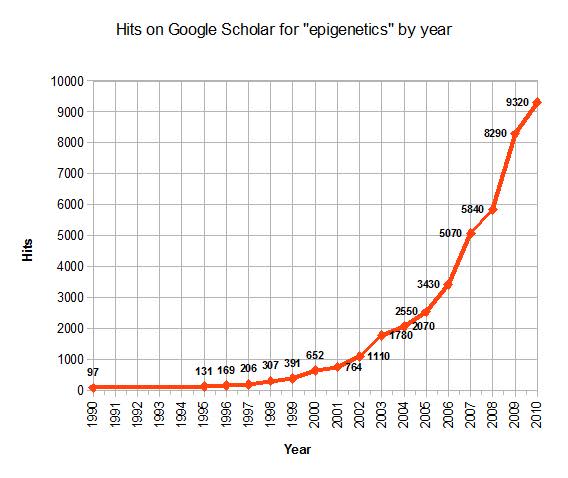 And here's the Google Trends results: 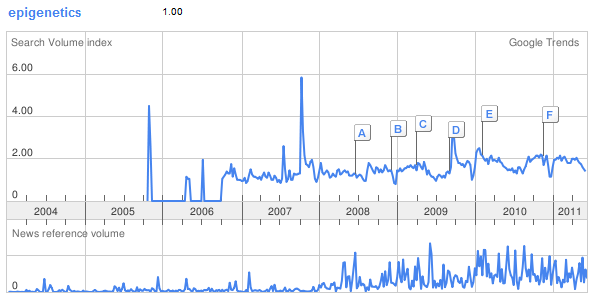 Either the media only discovered epigenetics in 2008, or Google's index wasn't very good. I suspect the former, as I started being asked about the term by intellectual non-science types circa 2008. For Google Correlate "epigenetic" and "subjective" have a correlation of 0.91, and "epigenetics" and "we create" have a correlation of 0.89. These are a little disturbing, and I hope epigenetics doesn't go the way of quantum theory and general relativity and become abused in other disciplines. For example, "epigenetics means that genetic inheritance is a subjective fiction!"