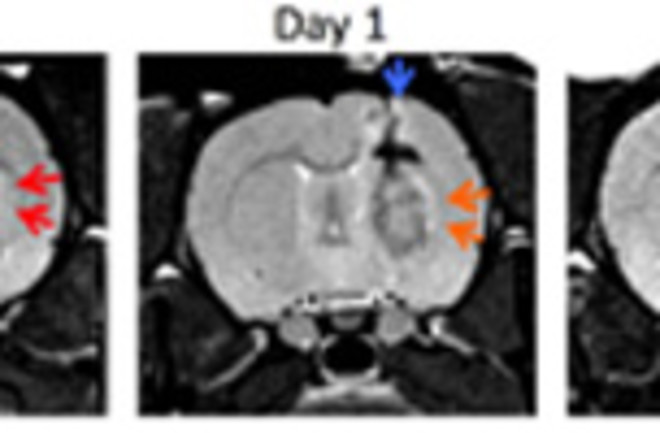 Researchers have developed a treatment based on an injection of neural stem cells encased in a biodegradable polymer that replaced the brain tissue in rats that had been damaged by stroke. Led by British neurobiologist Mike Modo, the team was able to show that the hole in the brains of rats caused by a stroke was completely filled with “primitive” new nerve tissue within seven days. This raises the possibility of radically better treatments for a condition that is the leading cause of adult disability in industrialized countries [Technology Review].

Previous stem cell research in rats with stroke damage had seen some success, but was limited by the tendency of the cells, which lack structural support, to migrate into tissue outside the targeted area. For the new study, which will be published in Biomaterials, the researchers used the polymer PLGA to construct tiny balls one-tenth of a millimeter thick, and loaded them with neural stem cells. These were injected into holes in the brain created when the immune system removes dead tissue caused by a stroke. The polymer’s ready-made support structure helped the stem cells to form new brain tissue in the cavity [BBC].

Once inside the brain, the particles link up to form complex scaffolds. Modo’s team used MRI scans to pinpoint where the stem-cell injections were needed and to monitor the development of new brain tissue [Technology Review]. The next step is to add a protein, VEGF, that will encourage blood vessels to expedite the development of the new tissue into mature tissue. According to Modo, over a few days they were able to see cells migrating along the scaffold particles and forming a primitive brain tissue that interacts with the host brain. In time, the particles biodegrade leaving more gaps and conduits for tissue, fibres and blood vessels to move into [BBC].

The cells used, derived from stem cells taken from mouse embryos, had already progressed some of the way to becoming neurons [Press Association]. The announcement of the stroke research came on the same day that U.S. President Obama lifted restrictions on experiments using embryonic stem cells, and provided a vivid example of the potential medical breakthroughs that stem cell research could eventually bring about.