Brad Pitt + Angelina Jolie = saving the world one baby at a time?

Angelina Jolie and Brad Pitt are classic "beautiful people." By now you know they are going to have a baby. What sort of child will this be? Handbag.com offers you a projection: 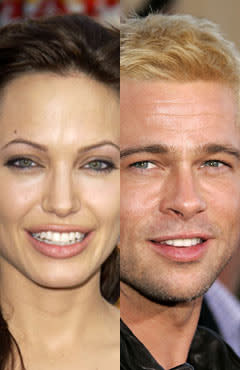 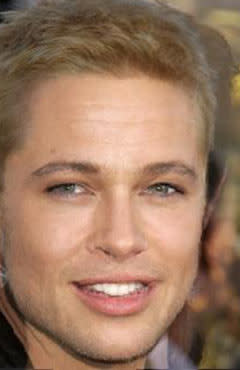 Not half bad. Certainly more traditionally beautiful than the Brit Rock look-alike produced by Jennifer Garner and Ben Affleck. Why are Brad Pit and Angelina Jolie so beautiful? Neither of them were raised in dire circumstances, but likely they have a "genetic leg up." In any given population there will be a genetic load, a number of deleterious alleles which decrease average population fitness from the idealized maximum. But, there will also likely be variation of genetic load. We know this intuitively because some individuals are "less fit" than others, eg., an individual who carries two copies of the Cystic Fibrosis allele. But many deleterious alleles which we carry do not have such prominent effects on our phenotype, but may nevertheless detract from our ability to reproduce with the graceful ease that a true Intelligent Designer might have gifted us with. Some of these deleterious alleles are lethal recessives. The estimates for the number of lethals that a human carries usually do not go much above 30 (and are often below 10). The rationale is that the rate of spontaneous abortion among first cousin matings, and the rare sibling matings, would be far higher above the population median than they are. Since relatives are likely to carry similar lethals there is a great likelihood for intersecting loci of lethality. As the number of spots in the genome of these lethals increases the mathematical possibility of generating offspring without two lethal copies of an allele on all the loci become neglible .^1 Please note that this small number of lethal loci also implies there is likely to be variance within families because of sampling effect (some siblings will get two good copies, some only one). In The Mating Mind Geoffrey Miller contends that this sibling variance is crucial in dumping deleterious alleles from the gene pool every generation that are built up by mutation (ie., less healthy siblings do not reproduce to the same extent, if it at all). It is important to note that "dominance" is often not perfect, and even if one "good copy" of a gene can mask lethality, its function might be suboptimal. In concert with the host of other deleterious alleles this might result in developmental stress and susceptibility to infection because of lack of genetic health. This is an expectation, not a guarantee. A good throw of the genetic die helps, but it is not sufficient for preternatural beauty. But how can Brad Pitt and Angelina Jolie save the world? Well, the title was hyperbolic, but one of the concerns of the late evolutionary biologist William D. Hamilton was that the human population was not removing deleterious alleles from the gene pool fast enough. The reason is that humans are extremely complex contingent organisms with large genomes and low reproductive values reduces the ability of selection to sift through those genomes. Hamilton was concerned about a mutational meltdown, as the number of deleterious alleles increases, the mean fitness decreases. As mean fitness decreases there is potentional for reduced population size, at which point random genetic drift can swamp selectionagainst deleterious alleles. As more and more deleterious alleles build up and the genetic load increases the population keeps decreasing and random genetic drift becomes more and more powerful vis-a-vis natural selection. Many biologists do not share Hamilton's concern, in The Cooperative Gene evolutionary biologist Mark Ridley proposes that spotaneous abortion suffices to purge the gene pool of deleterious load. If individuals who carry deleterious alleles survive to adulthood the theory is that they are more likely to produce a fetus which will be aborted because of developmental problems. But spotaneous abortion isn't the only option, last week Elizabeth Weil in The New York Times Magazinecovered the controversy around "wrongful births." Even today abortions are reducing the number of children who are born with Down Syndrome, but this is not really purging genetic load since it is a trait that is caused by massive de novo chromosomal abnormalities which would not result in any contribution to the gene pool in any case. On the other hand, diseases like Tay Sachs are being prevented by genetic testing so that heterozygotes do not marry, or at least abort any fetuses which are homozygous for the abnormality. In this way it seems that the fitness of Tay Sachs carriers is heightened, and so the frequency of the Tay Sachs allele is greater than it would be because of modern genetic science. The key is whether heterozygotes are equivalent to normal homozygotes. Some people argue that there are phenotypic differences between Tay Sachs heterozygotes and normal homozygotes. But this is just the tip of the iceberg, the postgenomic era will likely usher in a wide range of tests, not just for monogenic Mendelian disorders, but also for genes that suggest a propensity in concert with other genes for particular traits. It maybe that genes have powerful epistatic effects, or, their expression is diffentially mediated by a given environment, and so on. It is often stated that the ethical dilemnas posed by the new genetic science will be far more complex than the science itself, but I am not so sure as we move past testing for Mendelian traits toward the cheap sequencing that might give clues as to the shape of quantitative traits.

How many parents would pay to get that extra edge for their child, a notch up the normal distribution?

If life does not begin until late in the pregnancy, then the first trimester could become a gambler's playground and the current ethical conundrums spawned by sex selection might be but the faintest blood in the water. As for Angelina and Brad...being beautiful might just be the grace they get to avoid many of these questions, their faces being manifest advertisements for their health and the reason for their wealth. Addendum: Please note that there is a lot of controversy around many of the terms like "fitness," or the possibility that fitness is heritable (or not). Additionally, though I believe there is a lot of circumstantial evidence for the correlation between beauty and genetic health...it is still circumstantial. 1 - If one of the grandparents has a lethal on a locus, then each viable offspring has a 1/2 chance of carrying that lethal as well. Assuming that the spouses of the siblings don't carry the lethal allele then each grandchild has a 1/4 chance of carrying that particular lethal allele (coefficient of relatedness here is 1/4, so that makes sense). For any two random grandchildren there is a 1/16 chance for a carrier + carrier pairing. 1/4 of the offspring would be inviable. So, multiplying out the independent probability of a 1/16 chance for carrier + carrier matings * 1/4 chance of the lethal combination, you have a 1/64 chance of the lethal reappearing in great-grandchildren assuming a first cousin mating. Or, to be optimistic, a 63/64 chance of the lethal being masked. Pretty good, huh? But what about other loci? The chance are independent, so you would note that as (63/64)^n, as n approaches a higher number the probability of "missing" a hit on all loci starts to drop fast (a "hit" would be a homozygous lethal combination). At 45 loci you reach below 50% expectation of a miss on the all the loci due to first cousin marriages. The numbers for siblings are even more horrendous. And this doesn't take into account that there is another grandparent in the picture...with their own unique bundle of dirty genes.