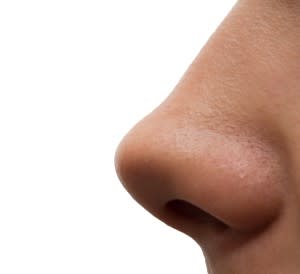 The nose is made for whiffing odors, but apparently it is not the only organ in the human body with a sense of smell. Researchers in Germany have found that heart, lung and blood cells, among others, also have olfactory receptors. When you walk by a pizza joint, chemical odors waft through the air and latch onto olfactory receptors in your nose. These receptors trigger a series of reactions in your brain, ultimately resulting in your identifying the particular combination of scents associated with steaming tomato sauce and melting mozzarella cheese. Based on these neural messages, your brain decides whether those odors are delicious or unappetizing, and chooses foods accordingly. But in recent years scientists have learned that your nose is not alone when it comes to its ability to sniff. For example, human sperm rely on olfactory cells [UPDATE: olfactory receptors] to interpret chemical cues that help them find and wiggle their way toward unfertilized eggs. Now researchers in Germany say cells in our blood, heart and lungs share a similar sense of smell, according to their findings presented at the annual meeting of the American Chemical Society over the weekend. The researchers, based at the Technical University of Munich, set up an experiment to test the response of non-nose receptor cells to chemical odors. They put primary human blood cells on one side of a walled chamber and good-smelling chemicals on the other. These pungent chemicals, called biogenic amines, are found in all sorts of foods and drinks and serve as chemical messengers. With no nose involved, the blood cells in the experiment still moved toward the chemical cues given off by generally yummy foods, like chocolate.

At this point, the researchers aren't sure what purpose the olfactory receptors serve in these cells. But since the average food contains far more potential odor compounds than our noses can detect, the researchers speculate that something could be going on with these chemicals beyond our nasal cavities. Perhaps your blood cells can "smell" the pizza in your system, or your heart can recognize the scent of the slice after you've ingested it.

Understanding the roles of these cells will require further study in the field of "sensomics," which looks at how the nose and mouth sense food. And it probably requires some taste testing, in which case we'd be happy to volunteer. Image courtesy of schankz/Shutterstock