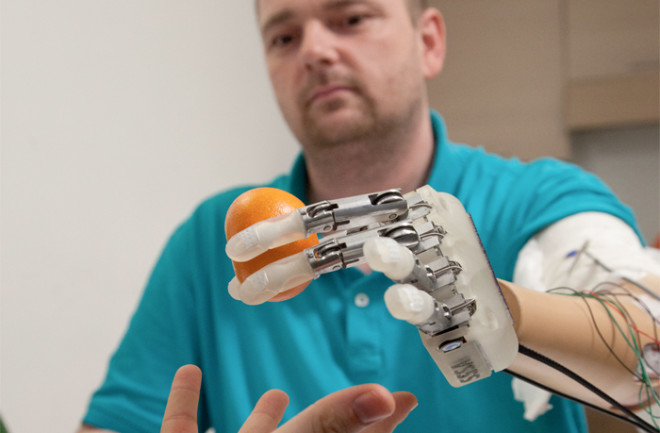 Amputee Dennis Aabo Sørensen wearing the sensory-feedback prosthesis. Credit: LifeHand 2/Patrizia Tocci Warning: This is a touchy-feely kind of story. Researchers have designed a new kind of prosthetic hand that allowed an amputee to experience the sensation of touch in real-time again. The prosthetic, which uses microelectric implants and sensors to create sensation, made it possible for the individual to distinguish between objects of varying shape and rigidity, such as a baseball and an orange.

Credit: LifeHand 2/Patrizia Tocci The bionic hand creates sensation for the wearer via a multi-step process. First, sensors in the prosthetic detect and measure changes in the positions of artificial tendons that control finger movement. (Think, for example, of how your fingers move as you run your hands over an object.) The measurements are translated via computer algorithms into an electrical signal that the human nervous system can understand. These signals are then transmitted to four electrodes implanted in remaining nerves of the wearer's arm — the first time, researchers say, that electrode implantation into an amputee's peripheral nervous system has been accomplished. Researchers released the below video showing Dennis Aabo Sørensen, who lost his hand nearly a decade ago, test driving the new prosthetic with enthusiasm.

The Future of Prosthetics

The bionic hand, called Lifehand 2, is the result of a collaboration between a number of European universities and hospitals. Its design team, publishing their results in today's Science Translational Medicine, noted they were presenting a single case study and much more research needs to be done. However, they said, their initial success could become the foundation for designing far more advanced artificial limbs that might be able to detect temperature, texture and other sensations.