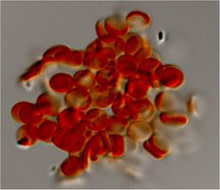 Flexibility matters. Research teams around the world are attempting to develop new tiny synthetic particles that will enter your bloodstream to act as red blood cells, to play the part of platelets and stop the bleeding, to latch onto damaged areas and deliver drugs there, and more. And to make these lab-created particles as effective as possible, they need to stay in one's system and not get stuck. In this week's Proceedings of the National Academy of Sciences, Joseph DiSimone and colleagues say they have figured out a way to mimic the twistable, turnable, bendable, foldable nature of red bloods cells to make long-lasting synthetic particles, and that they've tested those particles on a living system, a first.

Previous studies had focused on how size, shape and surface characteristics of particles affected their movement through the bloodstream, the team wrote, but flexibility's role is less well understood. To test it out, the researchers built artificial cells out of a gel material with "tunable elasticity" -- that is, the team could control how deformable the cells were. [Los Angeles Times]

Maximizing that elasticity could allow for particles that can wiggle through tiny blood vessels:

It has long been speculated that the deformability of particles influences how long they circulate and where they are distributed in the body. Red blood cells are equipped for longevity and have an average lifespan of 120 days. As they age, they become stiffer and less capable of passing through the tiny vascular structures in the spleen, where they're ultimately removed. [Nature]

discs that measured just 6 micrometers in diameter, then tweaked the discs' chemical compositions and tested the variations in mice. Some versions turned out inflexible and got stuck in the lungs; the ones that best mimicked the flexibility of real blood cells circulated for 30 times longer than their inflexible counterparts, and ended their lives in the spleen just like normal blood cells would. The fact that they reached the spleen—and didn't get stuck in the liver—is hugely exciting to the team.

That finding could have useful implications, DeSimone says. "There are lot of drugs you don't see on the market, as they get screened out because they have liver toxicity." As [coauthor Timothy] Merkel says, "Avoiding liver uptake could open up a large therapeutic window." Other hydrogel researchers also praised the team's finding. "It was quite exciting to see the low level of accumulation in the liver," says Patrick Doyle, a chemical engineer at the Massachusetts Institute of Technology. [Nature]

Synthetic blood, targeted drugs, and even particles intended to pull harmful substances out of the bloodstream could take advantage of copying the pliability that nature has already worked out, DeSimone says. Related Content: 80beats: New Nanoparticles Act Like Burrs to Target & Latch Onto Damaged Cells

80beats: To Mend a Broken Heart, Researchers Start in the Stomach