Understanding inter-individual differences in stress response requires the explanation of genetic influences at multiple phenotypic levels, including complex behaviours and the metabolic responses of brain regions to emotional stimuli. Neuropeptide Y (NPY) is anxiolytic...and its release is induced by stress...NPY is abundantly expressed in regions of the limbic system that are implicated in arousal and in the assignment of emotional valences to stimuli and memories...Here we show that haplotype-driven NPY expression predicts brain responses to emotional and stress challenges and also inversely correlates with trait anxiety. NPY haplotypes predicted levels of NPY messenger RNA in post-mortem brain and lymphoblasts, and levels of plasma NPY. Lower haplotype-driven NPY expression predicted higher emotion-induced activation of the amygdala, as well as diminished resiliency as assessed by pain/stress-induced activations of endogenous opioid neurotransmission in various brain regions.

A single nucleotide polymorphism (SNP rs16147) located in the promoter region alters NPY expression in vitro and seems to account for more than half of the variation in expression in vivo. These convergent findings are consistent with the function of NPY as an anxiolytic peptide and help to explain inter-individual variation in resiliency to stress, a risk factor for many diseases. 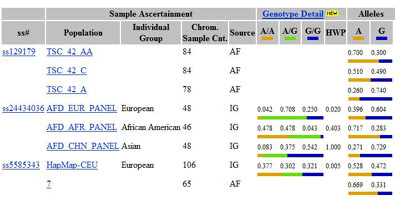 Since the authors pinpointed the SNP, I though I'd check it at the NCBI site. Don't know quite what to make of these results,^1 but I'm sure I'm not the only one who is curious when SNP's are implicated in behavioral variation. The great thing about science is that nature is one; which means that the post-genomic era has changed the game in a whole host of fields. Here you have a study attempting to smoke out individual differences manifested on the level of psychology, rooted in part on genetic variance which is mediated by neurological and molecular genetic processes. Many years ago the psychologist Jerome Kagan found that Asian babies are calmer than European ones. Why? If there is a genetic component to the variance of this trait, and the distribution of the causal genes differ between groups, then we may have a simple explanation for this phenomenon. I see no reason that between group differences are going to be limited to disease, and as the cost of genome sequencing converges upon triviality we'll find out as much there is to find out when it comes to personality variation, as it seems to me that many psychological phenotypes might have QTLs of relatively large effect. Related:Behavioral Genetics in the Postgenomic Era is a touch dated (it was published in 2002!), but it can still serve as a nice soft-landing to this ripening field. Jonah comments on the neuroscience angle. 1 - If there is between group variation, many times Africans exhibit more heterozygosity than Europeans & Asians. This is easily comprehensible when you recall that Africans seem to have more extant genetic diversity than non-Africans, possibly for historical-demographic reasons.