Beer Is Good for Your Bones? Well, Maybe. 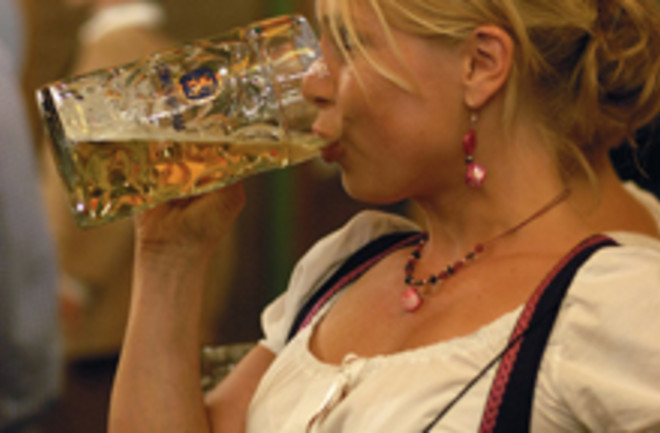 As study after study suggests that wine might have health benefits, beer tends to get the short end of the stick. But food scientist and beer lover Charles Bamforth wasn't going to take that lying down, saying:

"The wine guys have stolen the moral high ground. I resent the stance that people take that wine is better. It's not" [Discovery News]

. To prove it, he studied the silicon content of beers from around the country, and in a study in the

Journal of the Science of Food and Agriculture,

And while there is no official recommendation for daily silicon uptake, the researchers say, in the United States, individuals consume between 20 and 50 mg of silicon each day [LiveScience]

. Light lagers and non-alcoholic beers not only lack flavor, they showed the lowest silicon content in Bamforth's study. The ultra-hoppy India pale ales came in first. While Bamforth happily reported his findings about silicon content, the study didn't claim any link between beer drinking and bone health, which silicon supports. And so some scientists pooh-poohed the "beer is good for you" link that came out in the press release and some media reports.

"To conclude any bone health benefits from this study would require a great leap," said Dr. Tim Byers, deputy director of the University of Colorado Cancer Center in Aurora [ABC News]

. While previous studies have suggested that beer could be connected to strong bones, or could have other benefits like limiting kidney stones and gallstones, Bamforth stresses moderation given the detrimental health effects of a few brews too many. And even he isn't taking the results too seriously. While studies about the health benefits of beer and wine might make you feel little better about ordering the next pint or glass, he says, that shouldn't be your prime motivation.

"I would first consider flavor and whether you like it or not," Bamforth said. "Choose the beer you enjoy, for goodness sake" [Discovery News]

. Related Content: 80beats: Alcoholic Fruit Flies Don't Know When To Say When 80beats: Tiny Tree Shrews Live on Alcohol, But Never Get Drunk Discoblog: A Scientific Defense of Beer Discoblog: Why Do I Feel Woozy? I've Only Had One Enormous Glass of Wine DISCOVER: Stone Age Beer, recreating the brews of the past