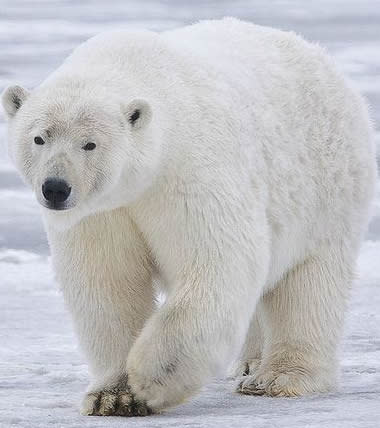 A few years ago a paper came out which suggested that the brown bears of the ABC Islands of southeastern Alaska were more closely related to polar bears than they were to other brown bears. More precisely, polar bears and ABC brown bears formed a distinct clade set apart from other brown bears, so that the class "brown bear" was not monophyletic. This meant that all the descendants of the hypothetical ancestral lineage of brown bears are not brown bears. Like reptiles, brown bears may then be paraphyletic. If this is correct polar bears can be thought of as a derived and specialized lineage of brown bears, despite all their morphological differences. This is not just systematic arcana. The phylogenetic relationships of species has important implications for their conservation status, something all the more salient due to changes in the arctic habitat of the polar bear. But there is a catch with the science: it focuses on mitochondrial lineages. In other words, the matriline, the female line of descent. There are technical reasons for this, primarily having to do with the tractability of generating phylogenetic trees from nonrecombining data sets of mtDNA as well as the ease of extractions of this genetic material (it's abundant). And, in the case of ancient DNA abundance is still critical. Last week a new paper in Current Biology reexamined the phylogenetic relationships of polar bears and brown bears using ancient DNA samples. Unfortunately it resulted in some weird titles: 'Polar bear's ancestor is Irish brown bear, study finds'. We're revisiting the problem of 'mitochondrial Eve' all over, conflating mtDNA lineages with the total history of the species (granted, the fine print of the journalism usually alludes to this detail, but the headlines do not). Let's look at the paper itself. Ancient Hybridization and an Irish Origin for the Modern Polar Bear Matriline:

ResultsWe used a spatially explicit phylogeographic model to estimate the dynamics of 242 brown bear and polar bear matrilines sampled throughout the last 120,000 years and across their present and past geographic ranges. Our results show that the present distribution of these matrilines was shaped by a combination of regional stability and rapid, long-distance dispersal from ice-age refugia. In addition, hybridization between polar bears and brown bears may have occurred multiple times throughout the Late Pleistocene. Conclusions The reconstructed matrilineal history of brown and polar bears has two striking features. First, it is punctuated by dramatic and discrete climate-driven dispersal events. Second, opportunistic mating between these two species as their ranges overlapped has left a strong genetic imprint. In particular, a likely genetic exchange with extinct Irish brown bears forms the origin of the modern polar bear matriline. This suggests that interspecific hybridization not only may be more common than previously considered but may be a mechanism by which species deal with marginal habitats during periods of environmental deterioration.

In the methods they note that they "extracted DNA from 23 ancient Irish bears, 30 historic polar bears, four early Holocene (circa 8 kya) polar bears, and 17 modern polar bears." The primary results of their phylogenetic analysis can be seen below:

As you can see, the Irish brown bear lineages now interpose themselves between the ABC brown bears and the polar bears. A tree of this sort shows the paraphyly of brown bears, as a whole side branch is given over to what is notionally another species, polar bears. This phylogenetic tree also shows approximate time until the coalescence of the mtDNA lineages (back to the last common ancestor). The maximum value is ~120,000 years. If these results are correct the polar bear lineages separated from the now extinct Irish brown bears ~30,000 years ago! This is problem. It doesn't match the fossil record, which indicates the separation of polar and brown bears more than 100 thousand years ago. And, it doesn't match their own nuclear analyses on 20 markers, which also indicates a coalescence of more than 500 thousand years. Why the disjunction? The above tree was of mtDNA lineages. Below are a set of schematics which propose to explain at least some of the mtDNA results. In panel A you see a demographic scenario totally in line with the mtDNA, and contradicting the fossils and autosomal results. In this model polar bears emerged recently from brown bears. In B and C you see scenarios of hybridization, more or less complex, which illustrate how mtDNA can obscure more elaborated demographic processes, and substitute in their stead a spare tree: 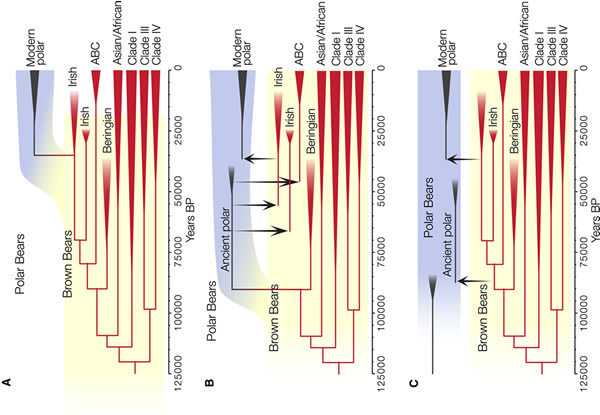 I think it is clear that the authors lean toward one of the last two scenarios: the history of the polar bears and their relationship to brown bears is not captured by mtDNA alone.

This is somewhat ironic, because the media representation has not spotlighted this at all. The authors outline a natural history scenario where the ranges of polar and brown bears expanded and receded with the ice ages and interglacials, and where these two populations met there were periods of hybridization. For reasons of chance many mtDNA lineages are lost over time, and so it may be that the dominant matriline of polar bears just happens to be that of an ancient brown bear female (or, it could be natural selection of favored mitochondria). I don't see why this is so surprising, the whole circumpolar zone is a potential point of contact. More broadly, it may cause us to reflect on the nature of the historical genetic processes at play amongst geographically expansive mammals. Recall the famous 'X-woman', who later became the Denisovan hominin. The mtDNA of this individual was far more diverged from Neandertals than the total genome turned out to be. Why? There are various technical reasons, but let's remember that in many ways ~500,000 years ago the situation with hominins wasn't that different from brown and polar bears. Some of the same insights about hybridization between diverged lineages may be usefully applied. Citation: