Battle of the Breads: Industrial White or Artisanal Whole-Grain? 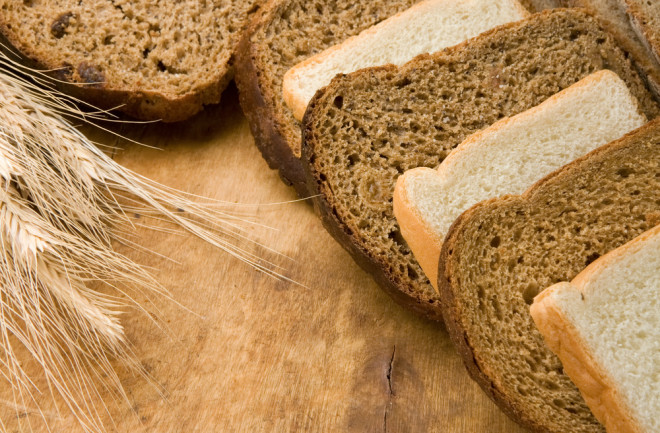 (Credit: Seregam/Shutterstock) What's a more healthful option for a sandwich: industrially processed white bread, or artisanal whole-grain bread? To those who seek clear-cut, black-and-white answers to burning questions like this one, we apologize preemptively. The answer is both; it simply depends on who’s eating it.

That conclusion is from researchers at Israel’s Weizmann Institute of Science who recently compared the short-term health effects of switching to a diet heavy in calories from white or whole-grain bread. In a randomized trial, scientists told twenty otherwise healthy people to increase their bread consumption for a week—from 10 percent of their daily caloric intake to 25 percent. Half of the participants supplemented their diet with processed white bread, and half munched on whole-grain sourdough prepared at a local bakery. After the first week, every participant stopped consuming bread for two weeks during what’s called a wash-out period. Then, the experiment was repeated, but this time the white bread group ate whole-grain and vice-versa. Before, during and after each stage of the experiment researchers monitored a host of health indicators: morning glucose levels, markers for inflammation and tissue damage, cholesterol levels, kidney and liver enzymes and levels of vitamins and minerals. Researchers also took stool samples to assess each person’s microbiome—the diverse bacterial community residing in their guts. In short, each person experienced different outcomes. Some people’s metabolic responses were more positive after switching to white bread, while others did better eating whole-grain. When scientists averaged the group data together, it was a wash—there were no clinically significant differences between white and whole-grain. They published their findings Tuesday in the journal Cell Metabolism. Here’s one important caveat: Everyone consumed the same amount of carbohydrates, and whole-grain bread contains fewer carbs. Therefore, participants ate more whole-grain than white bread. “We didn't take into consideration how much you would eat based on how full you felt. So the story must go on," says Avraham Levy, a study coauthor.

The world is awash in conflicting studies touting the supposed health benefits, or detriments, of various foods. Are eggs a superfood, or are they just as bad as smoking a cigarette? You’ll find dubious evidence for both on a simple web search. Or, look at the various ways countries define a standard alcoholic drink. In Austria, 20 grams of ethanol per drink is the standard, but in the United Kingdom, 8 grams is the accepted definition. Researchers say their study encourages us to tune out the noise and move away from universal dietary guidelines and focus more on individual variations. Indeed, in 2015 the same team from the Weizmann Institute had 800 people consume the same diet, and each person metabolized their diet differently. In other words, what’s healthy for one person may not be healthy for another. "To date, the nutritional values assigned to food have been based on minimal science, and one-size-fits-all diets have failed miserably," says Eran Elinav, a study coauthor. Elinav and colleagues are a few voices in a chorus of experts casting doubt on the scientific veracity of dietary guidelines. When the federal government rolled out its 2015-20 Dietary Guidelines, nutritionists chided its drafters for sowing public confusion and disregarding scientific evidence. In The Atlantic, journalist James Hamblin highlighted concerns that the meat industry had an outsize role shaping those guidelines. So, it seems, when reading dietary guidelines, it may be prudent to take them with a grain of salt—or not.