Bacteria Go on Suicide Missions to Help Their Peers 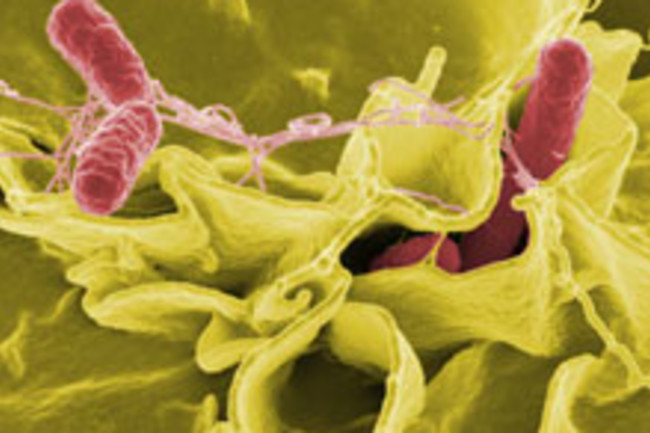 A new study has shown that salmonella bacteria use a surprising tactic when they attack a mammal's intestinal system. A small percentage of the bacteria mount a kamikaze mission from which they'll never return, but which helps allows the rest of the salmonella bacteria to thrive, spreading the infection and ultimately benefiting the species. Researchers found that in the early stage of an infection,

about 15 percent of the salmonella go on a suicide mission, invading the intestinal walls. There, the immune system handily wipes them out. But that also sets off a wider immune response that, while attacking the salmonella within the gut, also wipes out many other micro-organisms. “This inflammation removes many of the competitors, so the second group which waited outside can proliferate,” said [lead researcher] Martin Ackerman [The New York Times].

In the study, published in the journal Nature [subscription required], researchers found that the behavioral

trigger is molecular rather than genetic: about one in six salmonella microbes are randomly "selected" during cell division to go kamikaze. (Were the triggers purely genetic, all the bacteria would sacrifice themselves.) The population flourishes because of the selflessness of a few [Wired News].

This bacterial example fits with theories about how altruism evolved in humans and other animals.

If a gene for sibling altruism is always expressed, it will tend to disappear, because those members of a clutch or litter who possess it may sacrifice themselves for those who do not. However, if the gene is present but not always expressed, it can persist, because some of its carriers may survive to pass it on to subsequent generations [Nature News, subscription required].