Attitudes about evolution across countries

I have postedCreationism as a function of geography before. John Lynch pointed me to a new poll of Argentina, China, Egypt, Great Britain, India, Mexico, Russia, South Africa, Spain and the USA. Though the set of countries is smaller than in some surveys, the number of questions asked were much larger: -Heard of Darwin -Not Heard of Darwin -Know a good/fair amount Know a little/not much -Know nothing -Agree that scientific evidence for evolution exists -Do not think there is scientific evidence for evolution -Neither agree nor disagree there is scientific evidence for evolution -Think it is possible to believe in a God and evolution simultaneously -Think it is NOT possible to believe in God and evolution simultaneously -Neither agree nor disagree that it is possible to believe in God and evolution -Think only evolution should be taught in education -Think evolution should be taught alongside other theories -Think evolution should NOT be taught, only other theories -No theories at all should be taught -No Opinion You can see the results at the link above. It also turns out that all the nations listed are represented in the 2005 World Values Survey, so one can compare the responses to variables in that data set. So I looked at the variable "God Very Important," with the frequency who said it was "very important" and added it as a column. Additionally, many of the questions have alternatives which add up to less than 100% because only a subset of the respondents would be able to answer them (those who "Heard of Darwin"). I normalized these results so that they added up to 100% (e.g., so really 40% of people who have Heard of Darwin might agree that scientific evidence for evolution exsts). Comparing the relationships between the columns I selected a few that I thought were interesting, mostly to see where on the chart the nations cluster. 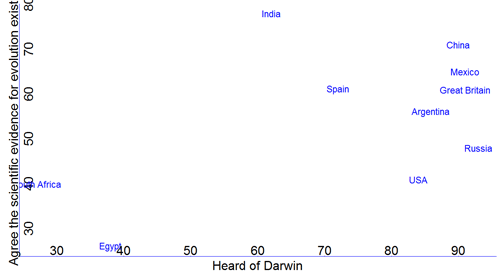 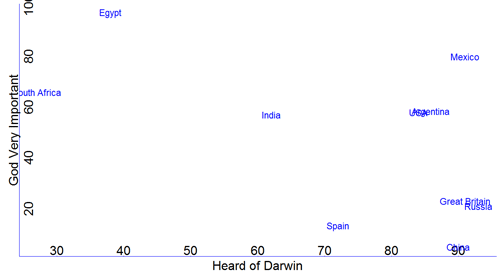 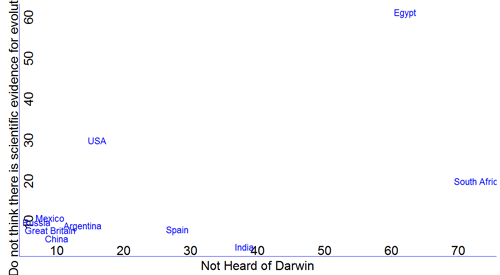 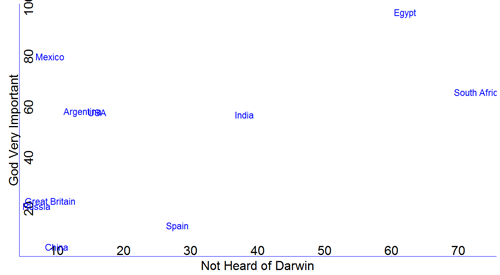 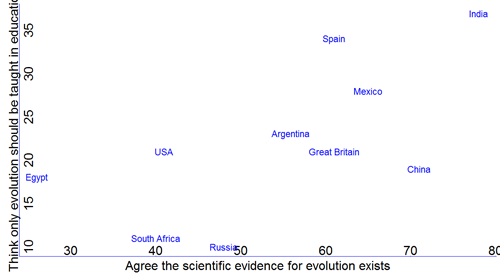 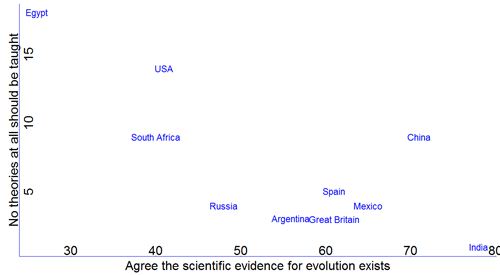 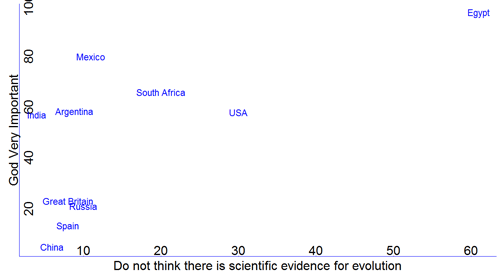 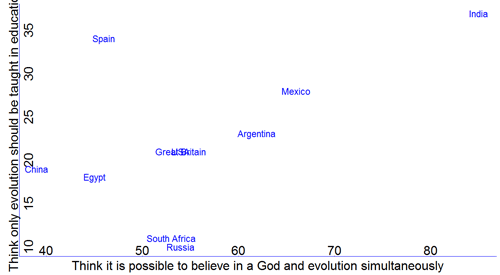 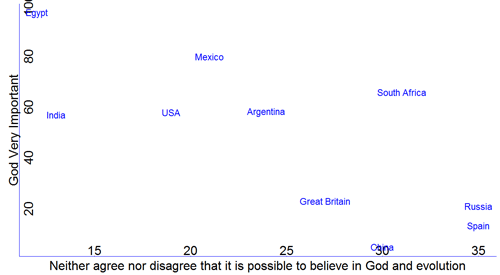 Though I am generally very wary of making statements as to the "nature" of a religion, it does seem to me that there are hints in these and other data that Hinduism and Islam seem to bias their believers in different directions in regards to evolutionary theory. Turkey, presumably a liberal Muslim nation, exhibits high levels of Creationism (somewhat higher than the United States), and Egypt, a more religious Muslim nation, yields even more Creationism (though a great deal are simply ignorant). Additionally, American medical doctors who are Muslim are the most Creationist of religious doctors. In contrast, Hindu doctors are not very Creationist at all, and though penetration of the ideas of Charles Darwin are rather modest in India there is little Creationist sentiment among those who know of evolution. China and the United States present different cases. American opinion is rather polarized; the population is generally aware of evolution but a large reservoir of Creationism has developed over the past few generations. In contrast the secular Chinese are more pro-evolution, but there also tends to be an attitude which is congenial to a "New Atheist" conception that evolution and theism are incompatible. This is something the Chinese share with Egyptians, though their general conclusions as to the truth of evolution are in opposition. Finally there are confusing numbers out of Russia and China. It seems that though Indians are more religious than people in both of these nations, they are also more accepting of evolution. Why? I would posit that decades of Communism, which sometimes attempts to accrue to itself the glamor of materialist evolutionary theory, has had a negative affect on perceptions of the objectivity of science as a general matter (as Marxism asserts its scientific status). Some religious leaders argue that mixing faith & politics redounds negatively upon faith, but the same is no doubt true of science & politics. Note: Please make sure to keep in mind the scales, they vary from chart to chart (all are percentages). CSV file of data: evolint.csv.