For a sportsman, sometimes pay to have the referee seeing red. In some sports, a simple red garment can give an athlete a competitive advantage because the striking hues draws the focus of the referee. With a delightfully simple but beautifully crafted experiment, Norbert Hagemann at the University of Munster found that refs have a tendency to award more points to red-garbed competitiors. 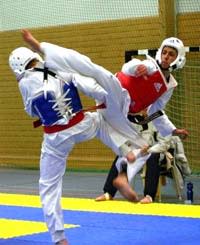 Three years ago, Russell Hill and Robert Barton found that in boxing, tae kwon do and wrestling, contestants who wore red are more likely to win their bouts. They reasoned that red - the colour of anger and aggression - gives athletes who don it a psychological boost that brings victory that much closer.

An interesting idea, but a later study by Candy Rowe showed that there's nothing special about red. She found that in judo, where players wear either blue or white suits, it's blue that grants the advantage. Her theory was that white suits are brighter than the blue ones and more strongly contrasted against the background. That gives the blue competitors a edge when it comes to following and anticipating their opponents' moves.

But Hagemann rejects both ideas. His explanation has nothing to do with the players at all, and everything to do with people who don't take part but wield massive influence over the outcomes of competitive sports - the referees. They're frequently forced to make very difficult decisions under less-than-ideal conditions. Under these tough circumstances, small biases in their perceptions - like a tendency to look at the more striking colour - may come into play.

To test this idea, Hagemann and colleagues chose recruited 42 seasoned referees who, between them, had over 320 years of experience at judging tae kwon do matches. The judges watched one of two sets of videos clips, showing matches between contestants who wore red or blue gear. Both sets of clips were completely identical save for one key difference - in one, the experimenters had digitally swapped the colours of the fighters' clothes. 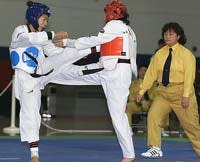 The referees watched the matches and, following the rules of the World Taekwondo Federation, awarded their points. And when Hagemann tallied up the scores, he found that the red fighters scored on average 13% more points than the blue ones. When a blue competitor was digitally transformed into a red one, his points tended to rise but a red competitor who was turned into a blue one was awarded lower scores. Neither set of clips was given a higher total number of points.

It's a very neat result - with a bit of digital sleight-of-hand, Hagemann found that referees will assign more points to red-clothed contestants than they would to blue-clothed ones, even if their performance is exactly the same.

It's unclear whether this referee bias explains Rowe's judo results, especially since she suggested that white is the more vivid colour. But Hagemann feels that it can certainly explain the Hill and Barton study where red competitors had a slight edge over white.

In their analysis, the edge bestowed by crimson hues only mattered when contestants were closely matched because only then are the referees' decisions important enough to tip the scales towards the more vivid contender. If one contestant is clearly superior, referee bias isn't going to make much of a difference even if one of the pair is wearing yellow with purple polka dots.

It's also worth noting that this referee effect only really applies to combat sports like tae kwon do and boxing where it's the ref who actively awards points. In these cases, it may be a good idea to change the rules so that red attire isn't allowed, or that referee decisions are supplemented with electronic aids.

In team sports like football, where the referee has more of a role in regulating fair play and punishing foul moves, it's unlikely to have much effect, so Chelsea need not worry when playing Arsenal. Indeed, in sports like football, it may even be counter-productive to draw the referee's attention if your primary strategy is to dive towards the pitch in mock agony whenever another player glances in your general direction.

Apparently, there's a relatively important sporting event going on. To commemorate this minor gathering, here's the first of two posts to about new (rather well-timed) studies, united by the loose theme of sports and psychology. The second one's coming on Tuesday.