Are Booze-Drenched Societies More Likely To Be Monogamous? 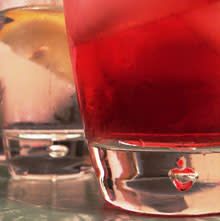 A new study out in the American Association of Wine Economist's "Wine Economics" journal suggests that monogamous societies are bigger drinkers than those in polygamous societies. Does this mean that being stuck with only one partner drives us to the bottle, or does drinking make us more likely to settle down? Actually the answer is most likely neither. Both monogamy and drunkenness seem to be related to economics, or at least, that's why both seem to have blossomed during the industrial revolution. Jo Swinnen, one of the study's authors, told The New York TimesFreakonomics blog (which seemed to have missed the actual conclusion of the study) that he noticed the correlation over, unsurprisingly, a glass of wine:

The inspiration came from a casual observation (over a glass of wine) that the two social/religious groups that do allow polygamy ((parts of) Mormonism and Islam) also do not consume alcohol. So we wondered whether this was a coincidence or not.

While many studies have compared alcohol and cultural traits, this is the study to look at its relationship with polygamy. The researchers compared the marital style and "frequency of drunkenness" of 44 well-documented pre-industrial societies (24 of which were polygamous; 20 monogamous) and found that monogamy was indeed positively correlated with drunkenness. The paper

In societies that practice agriculture and animal husbandry drunkenness occurs less than in hunting, fishing and gathering societies....Hunting tribes are said to have more monogamous marriage arrangements than agricultural tribes.

Historically, this correlation seems to be found frequently, everywhere from the Roman empire to the Industrial revolution, as the researchers outline in the paper

First, we find a historical correlation between a global transition from polygynous to monogamous societies and the growth of alcohol consumption. Second, the Greek and Roman empires were the only societies who consumed only wine in their era and at the same time were the only (and first) to introduce formal monogamy. Third, after the Roman Empire collapsed, formal monogamy was maintained and reinforced by the Christian Church--which was also spreading viticulture around Europe and which became the depositary of breweries and winemaking techniques. Fourth, the industrial revolution seems to have played an important role in the transition to effective/actual monogamy and in the growth in alcohol consumption.

Many people moved to urban and industrial areas and left behind the closer social structure and hierarchical organization in their villages. Heavy drinking became an important phenomenon among the new working class, induced by their subordinate and exploited status and less constrained by the social structure.

As the industrial revolution changed society, it also changed sources of wealth. Land became less important and human capital and intelligence became driving factors of wealth. The authors suggest that men began desiring "higher-quality" children, making their choice of mate more important. The authors believe these social and economic changes were the driving factor behind the correlation between monogamy and drunkenness, not any direct causal relationship between the two, the paper

The industrial revolution brought about the major and definitive change towards effective monogamy and popularization of alcohol consumption. Both changes (in alcohol consumption and in marriage arrangements) were induced by changes in social structures, economic developments and technological innovations associated with the industrial revolution.

While this makes sense for the changes during the industrial revolution, it doesn't seem to fully explain why polygamous societies today abstain from alcohol. Perhaps it has something to do with the recent finding that couples that drink together are happier

. Related content: Discoblog: Alcohol Makes You Think Everyone Is Out to Get You

Discoblog: Why Do I Feel Woozy? I’ve Only Had One Enormous Glass of Wine

Discoblog: To Animate a Drunken Mess, Use New Algorithms for Wrinkled Clothing and Flushed Faces