Are ATMs as Filthy as Toilet Seats? 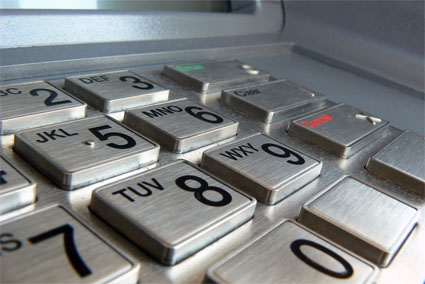 Cue the "filthy money" jokes: The same germs that touch your bum in public potties also touch your fingers during ATM transactions. In response to a survey of 3,000 British adults, a majority of which believe that public toilets out-filth everything else, the company BioCote--a producer of anti-bacterial coatings--decided to get to the bottom of the issue by comparing ATMs and toilets. Researchers scoured England, swabbing heavily-used ATM key pads as well as nearby public toilet seats. After letting the swabbed bacteria grow over night, they compared the cultures and discovered that both contained bacteria from the groups Bacillus and Pseudomonadaceae. The Daily Mail quotes BioCote microbiologist Richard Hastings:

"We were surprised by our results because the ATM machines were shown to be heavily contaminated with bacteria; to the same level as nearby public toilets. In addition the bacteria we detected on ATMs were similar to those from the toilet, which are well known as causes of common human illnesses."

But one should always consider the source: BioCote specializes in selling anti-bacterial products. How convenient, then, that they are able to find so much bacteria on ATMs. And the company's finding has garnered at least one detractor. CBS News quotes William Shaffner, a preventative medicine specialist at Vanderbilt University Medical Center:

"Bacillus is trivial," he tells CBS News. "It only causes infections in the most compromised people in hospitals. Pseudomonads is quite similar." Schaffner says you could swab almost anything and find these two microscopic buggers. "We live in a microbial world," he says. Whether found on telephones, ATMs, toilet seats, folded money, or counters in department stores, these types of environmental bacteria have never been conclusively demonstrated to transmit illness.

Although the research gives new life to the term "filthy rich," you probably won't see the ATM-equivalent of plastic toilet seat covers in the near future. Most harmful bacteria transmissions, after all, still happen via airborne or human-to-human contact. But all the same, after your next stop at the money-mouth machine, you might feel better if you wash your hands. Related Content: 80beats: Did Your Morning Shower Spray You With Bacteria? Science Not Fiction: Dirty, Dirty Spaceships Science Not Fiction: Dreaming of Carnivorous Plants and Life-Saving Bacteria DISCOVER: 20 Things You Didn't Know About Hygiene