And the Nobel Prize in Medicine Goes To... 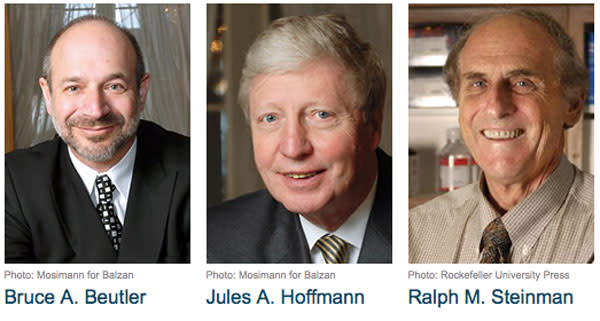 ...three pioneers of the study of the immune system

, who have helped pin down how the body reacts to invaders both with broad strokes and with exquisitely targeted weapons. But there's a bittersweet note to the congratulations and celebrations this year: we've just learned that one of the Laureates-to-be died three days ago. And that may jeopardize his prize. UPDATE 1:52 PM: The Committee has just announce that Steinman will remain a Laureate. Bruce Beutler and Jules Hoffmann get half the prize for discovering that without the Toll protein or its receptor, organisms are extremely vulnerable to infection. They found that the Toll system is the body's first line of defense against infection and an integral part of the innate immune system

, which brings a molecular sledgehammer down on any outsiders it detects. But the immune system can also respond with extreme precision to invaders. That's where Ralph Steinman's work comes in: he discovered the central role of dendritic cells

, which keeps track of all the invaders it's come across before and makes a note of how best to obliterate them. The Committee intended Steinman to get the other half of the prize money. There's an unusual twist, though. The public learned this morning via a Rockefeller University press release

that Steinman in fact died three days ago of pancreatic cancer, without ever knowing that he was about to win the prize. Nobel Committee regulations state that they cannot be awarded posthumously, although Laureates who die between the announcement in October and the ceremony in December get to keep the designation. The Committee reviewed the case and, as of a few minutes ago, have decided that Steinman will keep his Prize. Immunology is a notoriously hairy subject, so kudos to the Committee for wading in with such gusto. And congratulations to the Laureates!