And the fluffiest-tail-in-the-world award goes to... 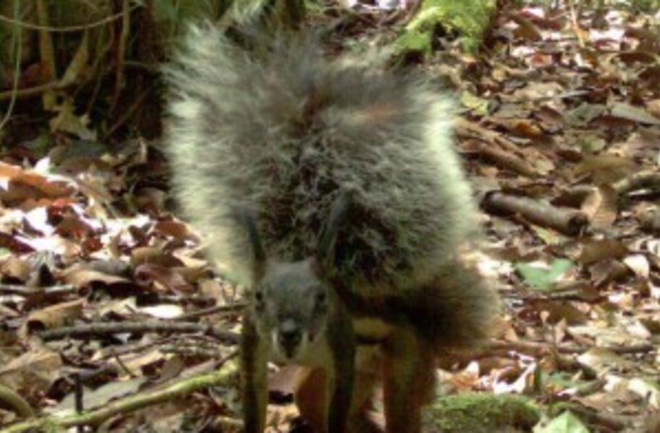 Image: HOSCAP/Borneo...this cute little guy, also known as the Tufted Ground Squirrel, or Rheithrosciurus macrotis to his friends. In his free time, he enjoys having a tail volume of 130% relative to his body volume (for comparison, skunks are at 35% and possums are at 100%), making it "one of the most voluminous tails among all mammals relative to body size." Scientists think he may use his huge tail for self-defense and to confuse predators during pursuits. But best of all, locals in Borneo (where his species is found) believe this "vampire squirrel" is capable of killing deer, disemboweling them, and drinking their blood. What a cutie!Tall Tales of a Tropical Squirrel "The Tufted Ground Squirrel, Rheithrosciurus macrotis is an endemic of the South East Asian island of Borneo. This species is remarkable in several aspects. Phylogenetic research indicates that its nearest living relatives are a group of South American squirrel species (Mercer & Roth, 2003). It is unclear how the evolutionary lineage leading to Rheithrosciurus ended up on Borneo without leaving behind any known relatives on either the Asian or North American land masses. The lineage of ancestors of Rheithrosciurus occupying Eurasia is either extinct without known fossil remains or the genus supposedly colonized Borneo in an independent long-distance colonization event (Mercer & Roth, 2003). More recent studies indicate that the Rheithrosciurus lineage diverged from a group of Palaearctic species of the genus Sciurus as early as 36 million years ago, and colonized Borneo overland from South East Asia (Pečnerová & Martínková 2012). Morphologically, Rheithrosciurus is also unusual. Its baculum is similar to that in the genus Sciurus, the squirrels of Eurasia, North and South America, but unlike those found in other South East Asian squirrels (Thomas, 1915; Zahn, 1941), while its longitudinally grooved incisors also remind one of Sciurus (Gray, 1867). Then, there is its club-shaped tail (Gray, 1867). Several early naturalists commented on the spectacularly large tail of Rheithrosciurus (Gray, 1867; Lyon, 1911; Shelford, 1916; Banks, 1931), as exemplified by Banks’ (1949) description of the species “run[ning] off swiftly along the ground, usually obscured by a large, bushy, fox-like tail”. Banks (1949) further noted that tail of Rheithrosciurus so obscured the animal in flight, “that it is hard to tell what it looks like and to define”. Abbott (in Lyon, 1911) thought the large bushy tail carried straight out behind gave an impression of an animal at least the size of a large Silvered Leaf Monkey (Trachypithecus cristatus), which has a head-body length of up 75 cm compared to 35 cm in Rheithrosciurus (Payne et al., 1985)." Related content: Ground squirrels use rattlesnake perfume to scare away predators.The blue jays are coming! Hide yo kids, hide yo nuts!Chickens with artificial tails reveal how dinosaurs roamed the earth.