An Anthrax Blast from the Past

A massive heat wave in the tundra of northern Siberia has ushered a twentieth century anthrax outbreak into the modern age. Over the past two months, the population of the isolated Yamal-Nenets region has been caught off guard by a pair of unprecedented emergencies, first in the form of a punishing heat wave with temperatures reaching 95F (35C), quickly followed by an anthrax outbreak as the 75-year-old corpses of infected reindeer have thawed from their permafrost biohazard coffins. It’s been a difficult summer for the indigenous Nenets, a nomadic tribe of reindeer herders that live in the remote Russian province of Yamal-Nenets where winter reigns eight months out of the year. Temperatures have soared to well above expected summer levels; lightning storms devoid of rainfall have sparked flash fires, scorching fields left exposed from melted permafrost. Experts attribute these dramatic events to climate change, but did not foresee this emergent side effect of global warming, wreaking havoc on humans and livestock alike. 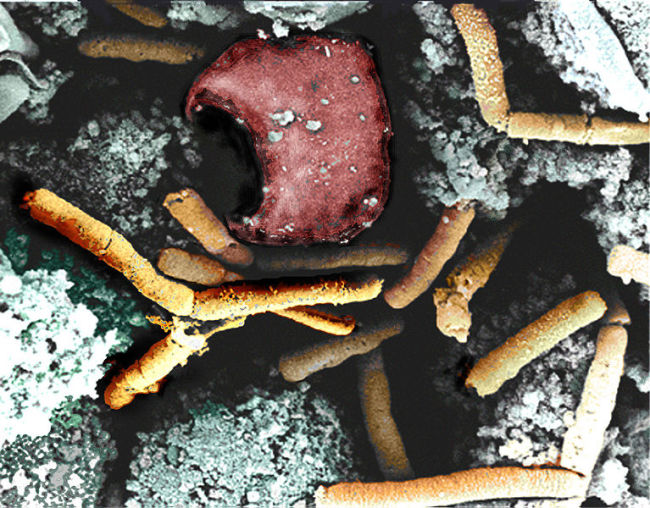 A colorized scanning electron micrograph of splenic organ tissue from a monkey infected with inhalational anthrax. The anthrax rod-shaped organisms are in yellow, while a red blood cell is in the center. Image: Arthur Friedlander. Click for source. Anthrax is a notoriously hardy microbe, encapsulating itself in an impenetrable spore coating that can last for up to a century. Infection with this soil-dwelling bacteria occurs by many routes, but most commonly through contamination of wounds or ingestion of tainted meat. Symptoms of infection depend on the route of infection. In the case of cutaneous anthrax, as commonly occurs in sheep herders and tannery workers, the bacterium will shed its hard exterior once it enters an open skin lesion to become active and form a painless necrotic lesion through the production of various toxins. Infection of the gastrointestinal tract after consumption of infected meat, on the other hand, may cause severe vomiting and diarrhea, with the real risk of the bacterium entering the bloodstream to produce devastating sepsis.The victims of the ongoing anthrax outbreak include 24 people of the Nenet tribe, including at least four children (1). Their livelihood, the herds of reindeer used as a food source, has been dealt a blow as over 2300 animals have perished from the heat, subsequent anthrax infection, or extermination by the Russian Defense Ministry (2). Soldiers trained in chemical warfare prevention burnt the remains of at least 2000 reindeer that fell victim to anthrax; thousands of people were forced to relocate, while others were quarantined (3)(4).The Russian government speculates that this anthrax outbreak began when a grazing herd of reindeer stumbled across the thawing burial grounds of reindeer carcasses dead from an anthrax outbreak 75 years prior, the permafrost once serving as a protective crust confining the anthrax-ridden corpses (1). 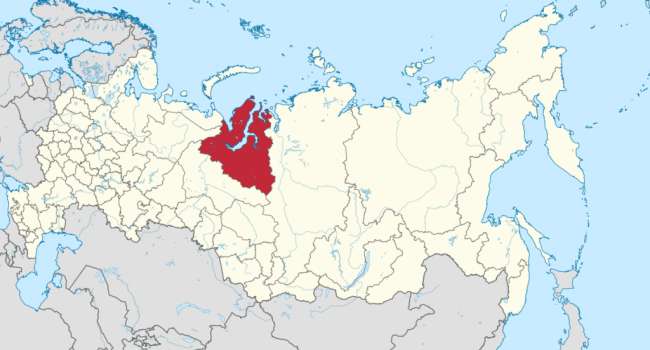 The Yamalo-Nenets Autonomous Region in northern Russia. Image: TUBS. Click for source. Nowhere else in Russia is a population and land more vulnerable to climate change than in the Russian Arctic. In a phenomenon described as “Arctic amplifcation” by global warming scientists, ambient air temperatures have increased by over a single degree centigrade while the temperature of the upper layers of permafrost has increased by 3C, increasing the depth of the annual melt from roughly a foot to four feet (5)(6). This change poses a considerable threat to the ecology as well as the livelihoods of the residents of that distant region. As the weather warms, animals migrate to either escape new and unfamiliar conditions or to capitalize on favorable environmental changes, thereby introducing new dynamics into a once stable region. The microbial ecology of the region will dramatically shift as well, increasing the likelihood of dangerous infections transmitted between man and animal, such as anthrax, tularemia, brucellosis, rabies, and certain tick-borne viruses (6).

Far more troubling is the real possibility that continued melting of the tundra may expose the graves of smallpox victims from the late 17th to early 18th century, unleashing a deadly virus that was once eradicated. In the 1890s, several outbreaks of smallpox decimated the scattered towns of northeastern Siberia, reportedly with a 40% case fatality rate (7).

The re-emergence of the smallpox virus, widely feared for its potential use as a weapon of bioterrorism, would be an unimaginable public health catastrophe. This has long been prophesied, as researchers based at the Russian Academy of Sciences cautioned five years ago, “as a consequence of permafrost melting, the vectors of deadly infections of the 18th and 19th centuries may come back, especially near the cemeteries where the victims of these infections were buried.”(8) Currently Russia is experiencing a violent collision of dramatic environmental change and the historical burden of deadly infectious diseases, until now safely entombed under the permafrost of the Far North. Though the current epidemic seems to be well under control by the authorities, questions about the future stability of our more delicate regions and the future intersection of epidemiology and climate change remain.Resources In 2004, researchers analyzed the bodies of five frozen Siberian mummies harboring the genetic material of deadly smallpox. Read more from the New England Journal of Medicine here.

An massive, enlarging crater in Siberia - ominously dubbed "the Gateway to the Underworld” - appeared 25 years ago and is symptomatic of a rapidly changing climate.