American family values: where even the dull can dream!

One of the issues when talking about the effect of environment and genes on behavioral and social outcomes is that the entanglements are so complicated. People of various political and ideological commitments tend to see the complications as problems for the other side, and yet are often supremely confident of the likely efficacy of their predictions based on models which they shouldn't even been too sure of. That is why cross-cultural studies are essential. Just as psychology has overly relied on the WEIRD nature of data sets, so it is that those interested in social science need to see if their models are robust across cultures (I'm looking at you economists!). That is why this ScienceDaily headline, Family, Culture Affect Whether Intelligence Leads to Education, grabbed my attention. The original paper is Family Background Buys an Education in Minnesota but Not in Sweden:

Minnesota is to some extent the Scandinavia of America, so the cross-cultural difference is particularly notable. You wouldn't be surprised for example by big differences between Mississippi and Sweden. But looking at a comparison between the Upper Midwest and Scandinavia is closer to seeing the impact of national culture and policy differences on populations which were originally very similar. Their methodology was simple, though as with much of this sort of behavior genetic work the statistical analysis can be somewhat labored. In both Sweden and Minnesota you had samples of dizygotic and monozygotic twins which give you a way to compare the effect of genes on variation in life outcomes. Sweden has large data sets from male conscription for behavior genetics analysis. They compared this with the Minnesota Twin Family Study data set. Since the topline results are pretty straightforward, I thought I'd give you some statistics. Table 1 has raw correlations. Note that they converted educational attainment into a seven-point scale, less than 9 years of education to completion of doctoral studies. 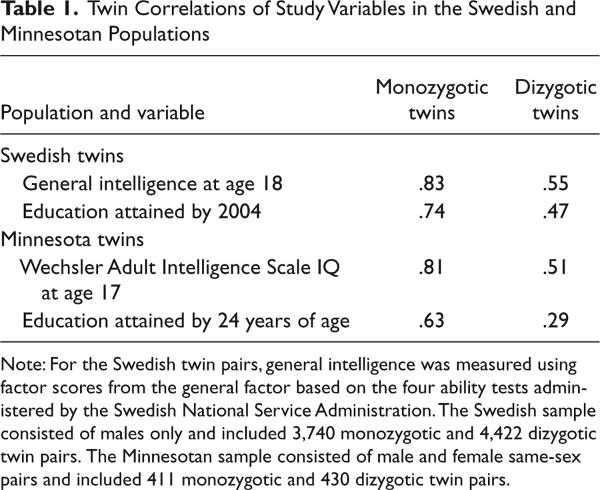 You see the expected drop off in correlation between identical and fraternal twins. Identical twins share more genetic identity than fraternal twins, so they're going to be more identical on a host of metrics aside from appearance. Those are just raw correlation values of traits though across categories of twins. The core intent of the paper was to explore the relationship between genes, family environment, and other environmental factors, and educational attainment. To do this they constructed a model. Below you see estimates of the variance in the trait explained by variance in genes, shared environment (family), non-shared environment (basically "noise" or error, or it could be something like peer group), from Sweden to Minnesota, and, at three intelligence levels. Two standard deviations below the norm is borderline retarded, ~2.5% of the population or so, and two standard deviations above the norm is at Mensa level.

It's interesting that as you move up the IQ scale the genetic variation explains more and more of variance the educational attainment. Someone with an IQ of 130 is likely to be university educated. But there are many who are not. Why? The way I interpret these results is that if you are that intelligent and do not manage to complete university you may have heritable dispositions of personality which result in you not completing university. If, for example, you come from a family which is very intelligent, but is low on conscientiousness, then there may be a high likelihood that you just won't complete university because you can't be bothered to focus. Or, you may have personality characteristics so that you don't want to complete university. A second major finding here is that Sweden and the USA go in totally different directions when it comes to the sub-average and dull in prediction of years of education. Why? The explanation in the paper seems plausible: Sweden strongly constrains higher education supply, but makes it available to those with proven academic attainments at a nominal price. Family encouragement and connections don't matter as much, if you can't pass the university entrance examination you can't pass it. In contrast in the USA if you're dull, but come from a more educated or wealthier family, you can find some university or institution of higher education which you can matriculate in. Supply is more flexible to meet the demand. I actually know of a woman who is strongly suspected to be retarded by her friends. I have been told she actually tested in the retarded range in elementary school but was taken out of that track because her family demanded it (she's the product of a later conception, and her family made their money in real estate, not through professional advancement). Over the years she has enrolled in various community colleges, but never to my knowledge has she completed a degree. If she had not had family connections there is a high probability she wouldn't have completed high school. As it is, she can check off "some college" on demographic surveys despite likely be functionally retarded. The next table is a bit more confusing. It shows you the correlations between the effects of the variable on education and intelligence. In other words, does a change in X have the same directional effect on Y and Z, and what is the extent of the correspondence between the effect on Y and Z.

Shared environment had almost the same effect on intelligence and education, while genetics had a more modest simultaneous effect. Not too surprising that non-shared environment didn't have a strong correlation in effect across the traits, the authors note that much of this is going to noise in the model, and so not systematically biased in any direction. Though the confidence intervals here are a little strange. I'm not going to get into the details of the model, because frankly I'm not going to replicate the analysis with their data myself. That's why I wanted to present raw correlations first. That's pretty straightforward. Estimates of variances out of models with a set of parameters is less so. Here's an interesting point from the correlations in the last table:

Now let me jump to conclusion:

This discussion about the role of environment, genes, and culture, on various outcomes should not hinge on one paper. But, these sorts of results are often not widely disseminated among the intellectual classes. One aspect of the American educational system in contrast to some other nations is that not-too-brights have university degrees. Education has long been a project for social engineering in the USA, going back to Horace Mann. Legacies, underrepresented minorities, the poor, those with particular talents, etc., are all part of the decentralized system of university admissions in the United States. In contrast, in nations such as Sweden or Japan there is a more centralized and universal set of criteria. This results is more perfect sorting by the metrics of interest without considerations of social engineering. I know that Sweden has traditionally had a small aristocratic class, while the Japanese aristocracy were basically abolished after World War II. Additionally, both are relatively homogeneous societies so considerations of racial representativeness are not operative. Or weren't until recently in the case of Sweden. But consider one reality: if such a system is perfectly meritocratic over time if the traits being evaluated are heritable then you will have genetic stratification and reduction of social mobility assuming assortative mating at university. Currently there is some handwringing by the elites about the fact that so few poor kids get admitted to Ivy League universities. I think there's a simple way to change this: get rid of the implicit Asian quotas. After all, there was a lot of socioeconomic diversity after the Ivy League universities got rid of their Jewish quotas, but the children of the Jews who didn't have to go to CUNY and went to Harvard are well off themselves. But more socioeconomic mobility through removing the implicit Asian quota would cause other difficulties, as elite private universities need their slots for both legacies as well as underrepresented minorities for purposes of social engineering/fostering diversity/encouraging donations. Additionally, just as with the Jews the welter of mobility in one generation of the children of Asian immigrants would settle into quiescence in the next if the traits which enable university admission are genetically or culturally heritable. Citation: