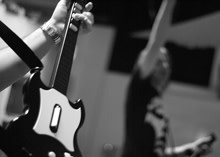 Wii rehab might sound like radical intervention for video game addicts, but it's actually effective physical therapy for patients recovering from strokes, injuries, or surgeries. Otherwise tedious strength and coordination exercises go by a little easier if they involve waving a wireless controller to play virtual bowling, tennis, and golf. But it doesn't stop there. The next step in video game rehab is "Air Guitar Hero," which would allow amputees to rock out with the immensely popular Guitar Hero game using a mechanical arm wired to their chest muscles. As part of a DARPA initiative for prosthetics research, scientists are now able to reroute the nerves that once controlled an amputee's arm to the chest muscles, where electrodes can then pick up the electromyographic signals to control a mechanical arm. But the process of learning how to accurately control a prosthetic arm, not to mention individual fingers, using only twitches of the chest, can be a slow and discouraging one. So researchers at Johns Hopkins University hacked a Guitar Hero controller so that its color-coded frets could be controlled with signals from the electrodes. They tested the Air Guitar Hero system on Iraq veteran Jon Kuniholm, who lost his right hand three years ago. With electrodes attached to what was left of his arm and a little practice, Kuniholm was able to score a respectable 70 percent on the easy level. “You’re doing something simple,” he says. “It’s not rocket science. But you have to do it fast and you have to time it right.” Next, the researchers say they want to adapt Wii Tennis to prosthetic training. Eventually they hope to make their software open source so that people can repurpose other games for rehabilitation. Related Content: DISCOVER: High Powered Prosthetics DISCOVER: Robotic Ankle Takes First Step 80beats: Monkeys Use a Electronic Brain Interface to Move Paralyzed Limbs

HealthWhen Working Out Makes You Sick to Your Stomach: What to Know About Exercise-Induced Nausea
Recommendations From Our Store