Age-Reversing Drugs on the Horizon? Not So Fast. 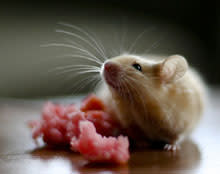 Researchers have identified targets that could help produce old-age-defying drugs and a fountain of youth for the baby boomer population... but haven't we heard this all before? The study, published in Nature this week, used the enzyme telomerase to stop and actually reverse the aging process in prematurely-aged mice. Telomerase keeps chromosomes structurally sound by beefing up telomeres, the repetitive segments of junk DNA at the ends of chromosomes. Telomeres act as protective buffers for the chromosome's working genes during cell division, when the chromosome is shortened and genetic material at the tips is lost. For the new study, researchers created special mice whose telomerase activity could be switched on and off. When telomerase was turned off, the mice aged prematurely.

These animals age much faster than normal mice--they are barely fertile and suffer from age-related conditions such as osteoporosis, diabetes and neurodegeneration. They also die young. "If you look at all those data together, you walk away with the idea that the loss of telomerase could be a very important instigator of the ageing process," says [lead author Ronald] DePinho. [Nature News]

The mice were grown to adulthood without activating the telomerase gene. Then, the researchers turned telomerase on for a month to see what happened to the mice. By giving the mice back telomerase activity, they were able to not just stop but undo the premature aging.

"What really caught us by surprise was the dramatic reversal of the effects we saw in these animals," says DePinho. He describes the outcome as "a near 'Ponce de Leon' effect" — a reference to the Spanish explorer Juan Ponce de Leon, who went in search of the mythical Fountain of Youth. Shrivelled testes grew back to normal and the animals regained their fertility. Other organs, such as the spleen, liver and intestines, recuperated from their degenerated state. [Nature News]

The researchers say drugs that increase telomerase activity could be used to treat premature aging diseases in humans, and could possibly even reverse or delay normal aging. But DePinto and his colleagues stress that the study was just a "proof-of-concept" experiment to show that changes to telomerase can affect aging. Before these results can benefit humans who fear the bodily effects of time, many concerns must be answered. Some critics note that the researchers used prematurely-aged mice completely lacking telomerase activity instead of normal mice. Since some normal human cells express telomerase, but not all of them do, there is no telling what the effect of ramping up its activity would be. And even if telomerase-activating drugs do end up working in humans, they could be useful for diseases of premature aging, but wouldn't necessarily combat normal aging. Says aging researcher David Harrison

"They are not studying normal ageing, but ageing in mice made grossly abnormal." [Nature News]

Though mice are often used to develop and test pharmaceuticals, many of those are revealed to be ineffective or unsafe in human trials. This is especially worrisome when mucking with telomerase, whose over-expression has been linked to cancer. The researchers didn't observe any cancers in these test mice, but telomerase was only activated for one month.

The downside is that telomerase is often mutated in human cancers, and seems to help existing tumours grow faster. But DePinho argues that telomerase should prevent healthy cells from becoming cancerous in the first place by preventing DNA damage. [Nature News]

that there are a host of other factors involved in aging that have been overlooked in this telomerase-based study.

"The key question is what might this mean for human therapies against age-related diseases? While there is some evidence that telomere erosion contributes to age-associated human pathology, it is surely not the only, or even dominant, cause, as it appears to be in mice engineered to lack telomerase." [The Guardian]

It looks like anyone hoping for the fountain of youth will have to hang around a little longer while researchers work out the answers to all these questions. Related Content: Not Exactly Rocket Science: The olm: the blind cave salamander that lives to 100

DISCOVER: A Modest Proposal: How to Stop Aging Entirely

DISCOVER: Can a Pill Keep Your DNA Young?