I referenced a paper in PNAS yesterday, and I thought it might be good to actually point to it today. There's nothing that new in the paper. It confirms the finding that ~20% of the ancestry of African Americans is European, and, that African ancestry seems to be much more dominant when it comes to components of the genome presumably disproportionately contributed by females (2/3 of X chromosomes). In any case, the paper, Genome-wide patterns of population structure and admixture in West Africans and African Americans:

Quantifying patterns of population structure in Africans and African Americans illuminates the history of human populations and is critical for undertaking medical genomic studies on a global scale. To obtain a fine-scale genome-wide perspective of ancestry, we analyze Affymetrix GeneChip 500K genotype data from African Americans (n = 365) and individuals with ancestry from West Africa (n = 203 from 12 populations) and Europe (n = 400 from 42 countries). We find that population structure within the West African sample reflects primarily language and secondarily geographical distance, echoing the Bantu expansion. Among African Americans, analysis of genomic admixture by a principal component-based approach indicates that the median proportion of European ancestry is 18.5% (25th-75th percentiles: 11.6-27.7%), with very large variation among individuals. In the African-American sample as a whole, few autosomal regions showed exceptionally high or low mean African ancestry, but the X chromosome showed elevated levels of African ancestry, consistent with a sex-biased pattern of gene flow with an excess of European male and African female ancestry. We also find that genomic profiles of individual African Americans afford personalized ancestry reconstructions differentiating ancient vs. recent European and African ancestry. Finally, patterns of genetic similarity among inferred African segments of African-American genomes and genomes of contemporary African populations included in this study suggest African ancestry is most similar to non-Bantu Niger-Kordofanian-speaking populations, consistent with historical documents of the African Diaspora and trans-Atlantic slave trade.

One of the value-adds from this paper is that the authors explored how African Americans related to disparate African populations. The historical records indicate that American slaves arrived disproportionately from the regions to the west of the Bight of Bonny. In other words, black Americans derive predominantly from the non-Bantu populations of West Africa, from Senegal down to Nigeria. This is in contrast to Brazil, where the black population was reputedly of more diverse origin, including many Bantu speakers from Angola as well as West Africans. I reedited part of figure 1 to show which African groups are in the study and how they relate to each other genetically: 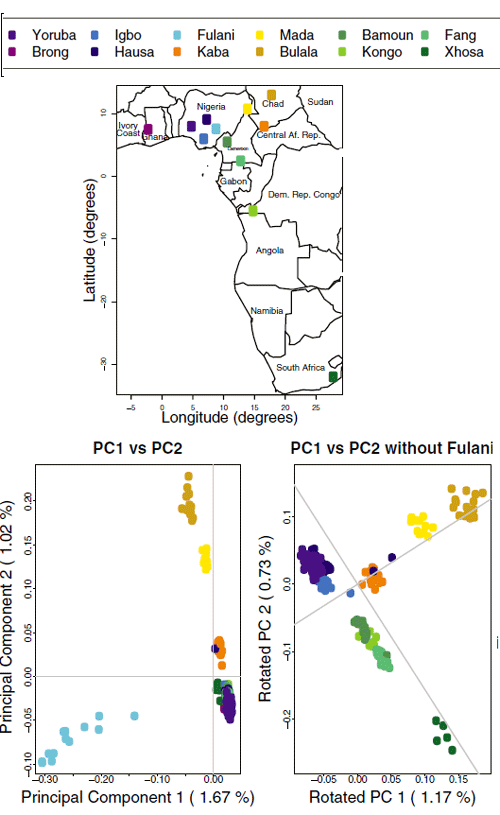 That the Fulani are atypical in this set of populations is not that surprising. They clearly have some Eurasian connections, including the a Eurasian version of the lactase persistence. The historical background behind this is also easy to pinpoint, the Almoravid domain spanned southern Spain to the Sahel, while more generally the Tuareg and Islamic orders helped mediate gene flow north and south of the Sahara. But even without the Fulani there is still some genetic variation which maps onto to ethno-cultural clusters. Along one axis seems to be the "Bantu Expansion," which scholars presume originated in eastern Nigeria. The second axis seems to point to a difference between West African & Bantu groups, and Nilo-Saharan groups. The differences are also evident in a FRAPPE derived plot. Again, K = # of putative ancestral groups: 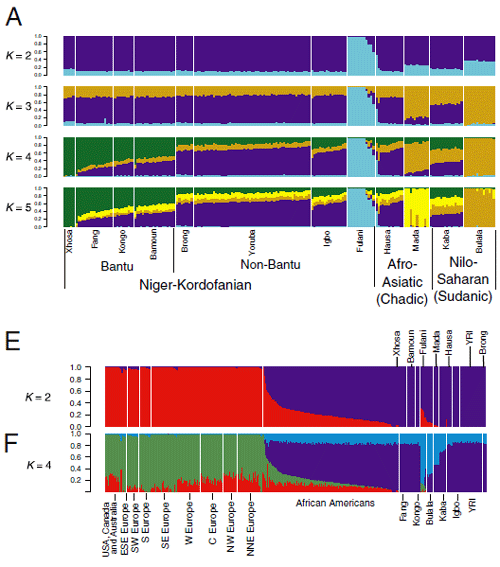 Panel A opens up the floor to a lot of discussion on how the Hausa identity in particular emerged, and the historical processes which led to the current Fulani genetic relationships. The Fulani language belongs to the Niger-Congo group, along with the Yoruba, Igbo and all the Bantu dialects. The Hausa language is Afro-Asiatic, like Arabic and Hebrew. But more importantly, the genetic structure seems explicable in light of the PC charts. This is important because of panel's E & F. Note the lack of variance of the "blue" component of ancestry among African Americans, which resembles what you see among the Yoruba. So it seems that African American ancestry which is non-European is from groups like the Yoruba genetically, by and large. Also, K = 4 seems to suggest that African American European ancestry is mostly from the populations of northern Europe, which comports what the historical record, as southern European waves of immigration generally post-date the ethnogenesis of a black American identity. Here's a PC chart from figure 2 which shows how African Americans relate to the various groups above: 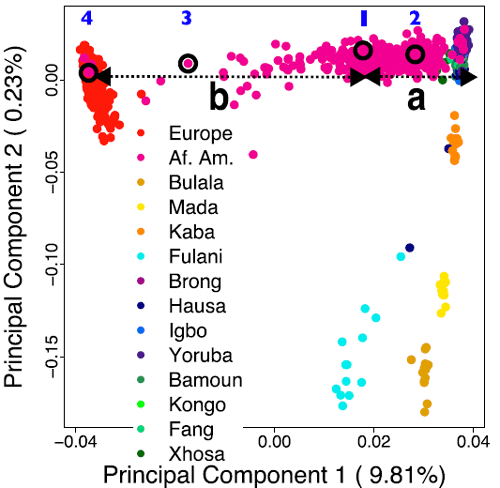 several important points. First, patterns of genomic diversity within Africa are complex and reflect deep historical, cultural, and linguistic impacts on gene flow among populations. These patterns are discernible using high-density genotype data and allow us to differentiate closely related populations along linguistic and geographical axes, even with limited sample sizes from many of our populations. Second, admixture can be reconstructed for local genomic regions efficiently at a high density of genetic markers. For this study, we tailored the method to admixed populations with two ancestral source populations, but the approach is generalizable to multiple populations. Application of the method to genome-wide patterns of genomic variation in African Americans reveals the rich mosaic structure of admixture in this population. We find that we can distinguish African ancestry among West African populations to a large degree (e.g., Bantu from non-Bantu Niger-Kordofanian populations) but that some populations (e.g., Igbo, Yoruba, and, to a lesser extent, Brong) are so closely related genetically that their contribution to patterns of African ancestry in African Americans is not reliably distinguishable. We believe that increasing the density of markers and, more importantly, sequencing directly in these populations to identify ancestry informative markers may make this possible in the future.