Admixture between humans and the Others 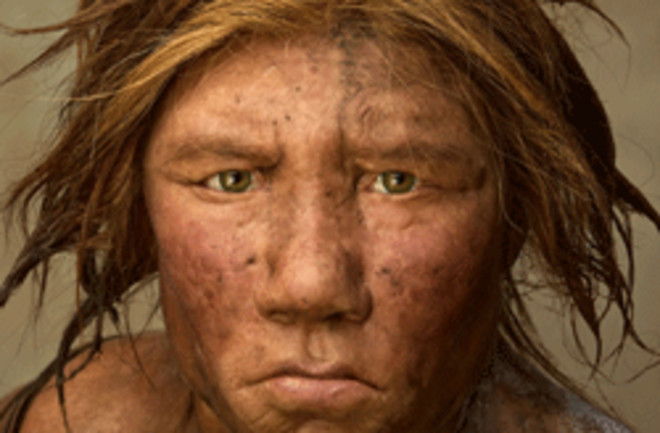 Mr. Carl Zimmer points me to a new article in Nature, Neanderthals may have interbred with humans. The details within the article are more tantalizing, it seems to me, than the headline would imply. The topline is this, researchers presented the following at the recent meeting of the American Association of Physical Anthropologists: * An analysis of 614 highly variant loci, microsatellites, in ~2,000 people from diverse populations imply some variants which seem to be derived from human lineages outside of the mainline which led to the anatomically modern humans who left Africa 50-100,000 years before the present to settle the world. I assume there were "long branches" on the phylogenies of some loci, indicating that some of the alleles were "separated" from others for long periods of time so that recombination wasn't able to dissolve the differences between distinctive haplotypes (if we're all descended from a small African populations which expanded demographically less than 100,000 years ago the common ancestor of the variants should have a shallow time depth). * The data imply two admixture events, one 60,000 years ago in the eastern Mediterranean, the other 45,000 years ago in East Asia. I think of this as a floor to the number of events. The latter one seems particularly clear in Oceanic populations from the reporting. * African populations do not have the variants for these two admixture events (there hasn't been that much back migration to Africa aside from north of the Sahara and the Horn of Africa. I assume that's because Africans are well adapted to their environment, and outsiders are not). In light of the recent discovery of a Siberian hominin which lived ~30,000 years ago, and was not a H. sapiens sapiens or H. sapiens neanderthalis, as well as the confusing but intriguing Hobbits of Flores, I think we can conclude that the the evolutionary genetic past was much more complicated than we'd assumed 10 years ago. Remember three years ago when there was a spate of research on a few genes which were suggestive of introgression into the human genome from Neandertals? There are other hints here and there which pop up in the literature over the years, some in Asia. But the methods being imperfect, and interpretation being somewhat an art, a consensus of Out-of-Africa + total replacement has been assumed to be a null. So we look at isolated results with some skepticism (I think this is justified). So is this going to be met with skepticism due to reliance on the orthodox model? This section of the article is intriguing:

A test of the New Mexico team's proposals may come soon. Svante Pääbo and colleagues at the Max Planck Institute for Evolutionary Anthropology in Leipzig, Germany, announced early last year that they had finished sequencing a first draft of the Neanderthal genome, and they are expected to publish their work in the near future. Pääbo's earlier studies on components of Neanderthal genomes largely ruled out interbreeding, but they were not based on more comprehensive analyses of the complete genome. Linda Vigilant, an anthropologist at the Planck Institute, found Joyce's talk a convincing answer to "subtle deviations" noticed in genetic variation in the Pacific region. "This information is really helpful," says Vigilant. "And it's cool."

Trying to glean what results Paabo is going to come out with is like reading tea leaves, but it is notable that a colleague at Max Planck seems to be excited about the results of this study. I do not get the sense that any of these results would reject the model that the overwhelming signal of ancestry in non-African humans is African. There's a reason that mtDNA, later analysis of classical markers, and finally modern genomics (as well as cladistic analysis of skeletal features) imply that there was an Out of Africa event, whereby anatomically modern humans entered into a period of massive demographic and range expansion from a small ancestral group. But that does not preclude the assimilation of other groups along the way, and there is circumstantial evidence of sex between the Others and modern humans (the time of separation between various hominin lineages is on the low side in relation to various other taxa which can still produce fertile hybrid young). A final point is that if these results hold up, one might look to Africa itself for other hybridization events. It may be that ancient hominin genetic variation is preserved in modern Africans as H. sapiens sapiens entered its period of expansion within that continent. Those signals may be currently obscured because the archaics in Africa were genetically more similar than those outside of Africa, and the African genome hasn't been as well characterized as that of other populations in relation to its great diversity (remember the finding of new SNPs in the recent paper on Bushmen). Image credit: National Geographic, Wikimedia Commons